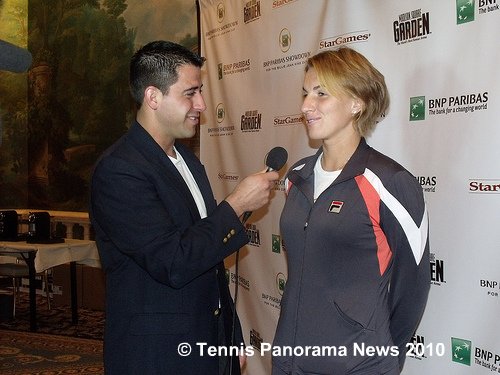 (January 17, 2013) Svetlana Kuznetsova needed only 52 minutes to dispose of twenty-sixth seed Hsieh Su-Wei and progress through to a third round meeting with Spaniard Carla Suarez-Navarro on Saturday.

The two time Grand Slam champion missed much of the second half of the 2012 season due to a knee injury and fell outside of the top 50 for the first time in 11 years, ending her season ranked number 72.

Kuznetsova spoke of her renewed passion for the game in Sydney last week where she qualified for the main draw and produced an upset win over Caroline Wozniacki before losing in the quarterfinals to Angelique Kerber. She has managed to remain committed to the game while the majority of her Russian contemporaries have retired, including 2004 Roland Garros champion Anastasia Myskina, Beijing gold medallist Elena Dementieva and former world number one Dinara Safina.

Kuznetsova raced to a 4-0 lead in the first set and allowed her opponent only two games before closing it out the set in 23 minutes. Hsieh broke Kuznetsova in the first game of the second set and it would prove to be the only game she would win, her opponent winning the next six games and the match 6-2 6-1.

Kuznetsova was pleased with her performance after the match saying “It was good. I thought it was not going to be an easy match because she’s a tough opponent, she’s unpredictable. So I was trying to stay focussed and do what I could.”

The heat was not an issue for Kuznetsova, and said playing in the Sydney heat wave last week was handy preparation. “It was 52 minutes so I’m happy to be out there before an hour. But it was alright, I had a good practice last week as well.”

On her third round match up against Suarez-Navarro she says “It’s going to be a tough match. Carla is never easy, she’s a very stable opponent but I did practice with her back in Spain so more or less I know how to play.”