You are here: Home / Contributors / Tomic Survives Brands to Gain Third Round of Australian Open 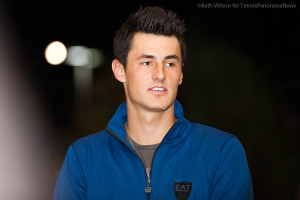 (January 17, 2013) MELBOURNE PARK, Australia – Bernard Tomic triumphed in a difficult second round match against German qualifier Daniel Brands 6-7(4) 7-5 7-6(3) 7-6(8) to set up a likely third round encounter against Roger Federer.

As temperatures soared in Melbourne on Thursday the players took to the courts with the mercury sitting at 38°C (100°F) and during the match hit 40°C (104°F), making the court play faster than normal. Both players wore caps on court to deal with the conditions.

Neither player was able to take control in the match as three out of the four sets ended in a tie-break. The only break in the match came in the eleventh game of the second set when Tomic hit a running forehand pass down the line to take a 6-5 lead and serve out the set.

In the post-match news conference Tomic admitted that he had underestimated his opponent and said that Brands played a lot better than his ranking of 120 would suggest.

Tomic closed out the match on his eighth opportunity in the fourth set tie-break and said he is feeling physically and mentally healthy after the two hour and 55 minute match.

“I was fine physically. Just the heat always distracts you when you’re playing an opponent that you can’t figure out, you can’t break him, he’s on top of you. It’s very difficult. It was very hot out there. I managed to cool down. I had a few cheap service games of mine. It allowed me to focus in the third and fourth set.”

Tomic says he very pleased with how he is serving and that being able to hold against Federer would be crucial in having a chance at beating him.

“I saw the stats as I was walking out. It was 23 to 26 aces my way. That’s probably the best I’ve ever served. I didn’t get broken today at all, not even in the first round. I think the last break of serve was in the quarters against Nieminen in Sydney. I think I just got broken once there. Tells you I’m serving really well.”

“But I’m going to use all this confidence into the next round, you know, potentially who waits there. We’ll see.”

Tomic says he’ll watch the match between Davydenko and Federer tonight and believes it might not go completely in the favour of the 17-time Grand Slam champion.

“He’s playing a guy that’s beaten him before. It’s not easy playing Davydenko. I’m sure Roger knows that as well. You can’t take anyone lightly, especially someone that’s been in the top 5 for like six years.”

If he does come up against the world No. 2,  Tomic is confident he will have more of a chance than ever to beat him.

“Yeah, if it is him, then what a match it is, you know, 10 out of 10 now with matches. I feel so confident. This is the perfect time to play him. I think, you know, I’ve got a good attitude to win. I’ve beaten a lot of good players over the last past two weeks, especially Novak. I think I can do it if he wins his match.”

“I’m ready. I mean, I’m not going to say, you know, I don’t have the belief. I do have the belief now. It’s possible. I showed that in Perth, that you can beat these players. Now I’m going to try to beat him.”