You are here: Home / Contributors / Del Potro Cruises to Victory at Australian Open 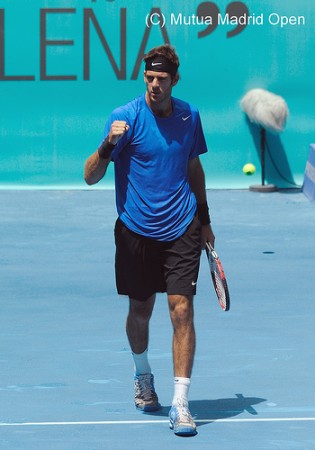 “I’m happy to win close to my best level.” Del Potro said on court after the match. “I served well and made a lot of winners with my forehand.”

Del Potro cemented his status as one of the players most likely to challenge the top three guys in the draw and win the Australian Open. He already knows how to win a Grand Slam and play against the best in the world having defeated Roger Federer in the final of the 2009 US Open.

Del Potro was untroubled throughout the encounter, breaking Becker early in each set and never looking in danger of losing his own serve. He won a remarkable 87% of first serves in play and produced a total of 50 winners and only 18 unforced errors in the one hour and 44 minute thumping.

When asked about the heat Del Potro said “I played much better than in my first round but it’s the same condition for the other players. This is tennis. I drank a lot of water before the match to stay hydrated.”

Elsewhere in Thursday evening Australian Open action, Gael Monfils fumbled his way to victory in a five set thriller on Hisense arena, double faulting on several occasions on match point before recording the 7-6(5), 4-6, 0-6, 6-1, 8-6 victory over Yen-Hsun Lu. He goes on to play countryman Gilles Simon in the third round who was victor on Thursday in four sets against Canadian Jesse Levine.

Richard Gasquet had an easy win over Alejandro Falla 6-3, 6-2, 6-2 in 1hour and 40 minutes and will play Ivan Dodig who defeated Jarkko Nieminen in five sets.