You are here: Home / Features / Federer Sets Up Exciting Third Round Clash Against Tomic 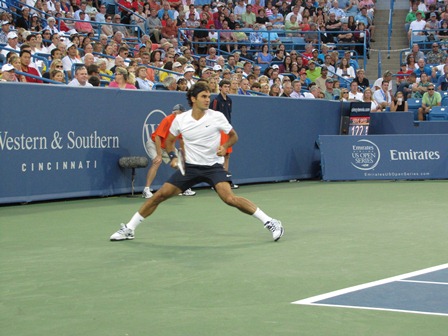 (January 17, 2013) MELBOURNE PARK,  Australia – Roger Federer had an easy straight sets win over long term rival Nikolay Davydenko 6-3, 6-4 6-4 to move through to a much anticipated third round encounter against Bernard Tomic.

Federer took to the court in a surprising ensemble of lavender grey shirt and pink detailing around his chest, shoes and sweatband in a change from the classic blue shift he displayed on day two of the Open. “I have nothing to say at all. I like to play around with various colors.” He said when asked about the color choice on court after the match.

Federer breezed through the match taking an early break in each set and never looking back. He was able to take the foot off the gas in the final set and sealed the match with an ace.

He discussed the match-up against Tomic in the post-match news conference and analysed the learning curve Tomic has had to experience in the past months.

“It’s nice he’s been able to turn it around after a tough end of the year last year. It seems he’s playing well. Obviously a difficult match-up in terms of early in the tournament. But I’ve got to be ready, so I’m looking forward to the match.”

Federer said that he should have an edge over the confident Tomic due to his experience and fitness level.

“Look, I have so much more experience than him. Last year I reached my thousandth match on tour. That’s what I meant. I know how hard a five-setter can be. I know how intense a night session can be and all these things.”

“Whatever that means, length of rally, length of match, intensity, I’ve been there. That could potentially help me, but it could also not help me.”

“We’ll see how it goes. But he’s done a really nice job today, for instance, in the heat. He’s already played at night, so you see that as well. I don’t have a big advantage in this regard. I don’t see it as an advantage actually.”