You are here: Home / Front Page News / Robson Stuns Kvitova in Marathon to Move into the Third Round 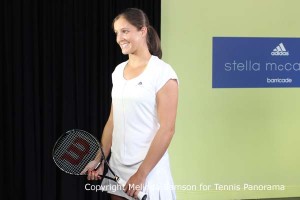 (January 17, 2013) For Great Britan’s Laura Robson  it’s a  the second straight major that she taken down a former Grand Slam winner, this time in 2011 Wimbledon champ Petra Kvitova of the Czech Republic. Robson survived No. 8 seed Kvitrova  2-6, 6-3,,11-9 in a match which lasted past Midnight in Melbourne.

At the US Open the teenage Robson upset both Kim Clijsters and Li Na.

Robson took advantage of poor serving by the Czech who hit 18 double faults. Robson rallied from 2-4 down in the final set to win.

“I never gave up,“ said Robson.  Even when she went up a break twice in the third, I just thought I can always break her serve, I just have to get as many returns in as I can.

“And in the end, I just thought I’ve got nothing to lose.  So I’m just going to relax on my serve a bit more and just go for it.”

“I knew it was going to be very, very tough and trying to return her serve in the first set was very, very hard,” the No. 53 Robson told the audience on court after the match.

“But I knew once I got my returns firing and a bit more confidence on my serve I could get myself back into the match and that’s what I did.”

“I just have to say I feel I was playing better in New York,” said Robson in comparing her play in the match to that of her play at the US Open when she stunned two seeds. “I thought today was pretty ugly, but in terms of how tough it was to close it out in the end, I think it’s right up there with one of the best wins.”

Robson will face another teenager in the third round – 19-year-old American Sloane Stephens. Stephens recently defeated Robson in the first round at a pre-Australian Open tournament at Hobart.

“She beat me last week in Hobart, and it was a pretty close match, but, yeah, I definitely feel like I could play a lot better than I did last week, and it’s going to be really tough, for sure, “ Robson said of Stephens.

“She’s in good form at the moment.  She’s a good mover, good ball striker.  It’s always going to be a tough match, but yeah, hopefully I can play better than I did today.”