You are here: Home / Features / Birthday Girl Kerber Fends Off Keys to Advance at Australian Open 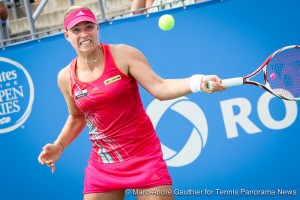 (January 18, 2013) Celebrating her 25th birthday, Germany’s Angelique Kerber held back a challenge from 17-year-old American Madison Keys 6-2, 7-5 to move into the round of 16 at the Australian Open on Thursday.

The first set opened with three straight breaks of serve, Kerber added an additional break to cruise to a 6-2 first set aided by Keys’ unforced errors.

The second set was much tighter with both women exchanging opening serve breaks hold their own until the 10th game when keys squandered a 0-30 opportunity on Kerber’s serve. The German held on to the game for 5-5 and broke the American’s serve at love to lead 6-5.

Keys fought back in the next game to get to double break point, but Kerber held steady and won the next four points to seal the match.

The key statistic in the match was unforced errors – the American had 41, the German 12.

For Keys, it was her first run to the third round of any major, playing in her second Australian Open.

“Madison is a great young player and it was very tough,” Kerber said on court after the match “So happy I won today on my birthday!”

The tournament brought out a birthday cake after the match and the crowd at the Rod Laver Arena sang “Happy Birthday.”

Kerber will play  Ekaterina Makarova in the round of 16 for a spot in the quarterfinals.