You are here: Home / Features / Ivanovic Wins Battle of the Serbs at Australian Open 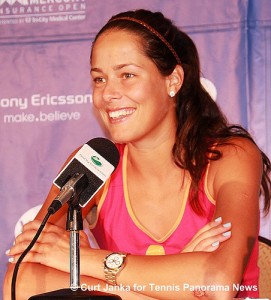 (January 18, 2013) MELBOURNE PARK, Australia – Ana Ivanovic won the battle of the Serbs on Friday at the Australian Open on Friday defeating fellow former world No. 1 Jelena Jankovic 7-5, 6-3 in one hour and 23 minutes.

It was a tense encounter between the two, Ivanovic getting in Jankovic’s face by fist pumping after almost every point and yelling “Ajde” on many occasions. The two have a long playing history, Ivanovic leading their head-to-head 8-3.

“I’m very happy. It was tough match. I think it was intense from the first to the last moment, but I really felt like I stayed in the zone and I played each point for, you know, for that point. That’s what was my goal today, so I’m very pleased I managed to do that and to do it well.”

Ivanovic was efficient from the baseline during the match while Jankovic just didn’t have the speed to reach enough of her compatriot’s strong forehands. Jankovic played more successfully to Ivanovic’s backhand side during the first set, at one stage winning 14 straight points when Ivanovic attempted to serve for the first set at 5-2.

Ivanovic put her foot down with the set tied at 5-5, breaking Jankovic after being down 0-40 and closing out the set on her next service game with an ace.

Jankovic saved one match point on her own serve down 3-5 30-40 in the second set but Ivanovic won the match on her second opportunity after Jankovic landed her backhand into the net after a superb Ivanovic forehand smash.

On losing her lead at 5-2 in the first set Ivanovic said, “Okay, well, the same way I got to 5-2 I got to 5-All. Didn’t happen much. I think she played some good points.”

“I don’t know, was it 5-4 when I was serving at 30-Love, I had made a loose double fault and that cost me, I think, that game. She played well? She strike the ball well.”

“You know, I’m very, very happy I managed to come back from Love-40 down in 5-4. I think that was huge game, and then again from 15-40 in the next service game. Just very pleased overall.”

Ivanovic spoke about the intense rivalry she has had with her compatriot over the years, the two not having the friendliest history.

“I think it’s competitiveness, and you have that with everyone you play, and especially someone

coming from your country. At the time we were both, you know, looking for No. 1 position and to

win a Grand Slam. You know, of course there is going to be rivalry, but I think there is healthy rivalry, too, because you kind of push each other.”

There has been a lot of talk about the physical appearance of Ivanovic in recent weeks, the Serbian star clearly losing a lot of weight which she says has allowed her more speed on the court.

“ Well, you know, it was really up and down for me. But it’s not so much about the weight, it’s just about the muscle and just getting the right balance, you know, because still you need to feel light on the court but you have to be powerful.”

“This is also my style of game. I’m very powerful player. I still need to improve on my upper body strength. I had a really tough match the other day, and today I came out and I was feeling fine and was explosive.”

Ivanovic plays an in form Agnieszka Radwanska in the round of 16 on Monday. Ivanovic won their first three meetings and Radwanska has won their most recent four. Ivanovic spoke about what she needs to do in the match.

“Being patient is going to be a key. It’s going to be tough, for sure. I have to be prepared to work hard for my points and to keep on putting pressure on her.”

“But, you know, it’s just, again, working hard and just staying in the moment. I will go over the tactics a little more with my coach today and tomorrow, and, you know, hopefully we can have a good match.”

“But it’s going to be, again, balance of, you know, being aggressive enough and then still patient enough.”