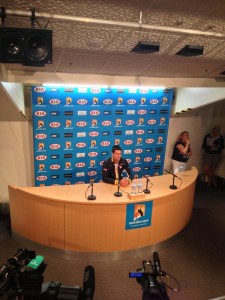 Djokovic is the two-time defending champion at Melbourne Park is looking to become the first man in the Open Era began in 1968 to win three in a row.

The match with Stepanek  which took 2 hours and 22 minutes was an entertaining one with the Czech constantly making dashes to the net and keeping up with pace of Djokovic’s shots.

“I wasn’t expecting an easy match coming into the third round and playing a seeded player, “Djokovic said.  “Top 30 in the world.  Somebody that has a lot of experience playing on the tour.

“He loves the big stage.  You saw how much fun he had.  I also had a lot of fun playing.  It was a very entertaining match.  As I said on the court, he’s very skillful, comes to the net, never gives you the same ball twice.  That’s something that makes him a different player from most of the guys.”

With Lance Armstrong’s interview with Oprah Winfrey airing in the United States on Thursday night, Armstong admitted to doping  and Djokovic was asked his opinion about the cyclist.

“He cheated the sport,” said the Serb.  “He cheated many people around the world with his career, with his life story.  I think they should take all his titles away because it’s not fair towards any sportsman, any athlete.  It’s just not the way to be successful.  So I think he should suffer for his lies all these years.’

“I lost a lot of faith in cycling, “ Djokovic continued.  “I used to watch it.  All the big champions that were there, Marco Pantani, now Lance Armstrong.  Yeah, I don’t want to say all.  I really don’t know.  There has been so much controversy about that sport.

“I’m sure that there are many cyclists in the world who are training very hard and trying to not use any enhancing drugs for their competition.

“But I think it’s not acceptable that they have physically so much races in short period of the time.  I think basically every single day, day and a half, they have to go through 200 miles.  Uphill, downhill in Giro D’Italia, Tour de France, that’s inhuman effort.  As you can see, Lance Armstrong, many other big champions, had to use something to succeed.”

Well, in tennis, you know, at least from my perspective, it’s really good.  Anti doping regulations a little bit maybe more strict in sense that you have to fill the whereabouts documents and you have to basically give an hour or two in every day of your life in a whole year, where you are.

But on the other hand, it gives them an opportunity to test you.  And you know it is the same for the other players.  At least from that point of view it’s fair.  And I have nothing against, you know, the anti doping federation, association, testing me 10, 20, 30 times a year.

I think as long as I know as many numbers of testing for the other players, I’ll be happy.

I wasn’t tested with blood for last six, seven months.  It was more regularly in last two, three years ago.  I don’t know the reason why they stopped it.

As I said, I mean, as long as it’s fair, it’s clean, we’re trying to protect the identity of this sport.  I believe tennis players are one of the most cleanest athletes in the world and one of the most competitive sports.

So as long as we keep it that way, I have no complaints about testing.

But in my opinion, yeah, there has been a complaints from players in few years, last few years, about this whereabouts system.  Why do we need to write where we are every single day of our 365 days when most of the time we’re spending on the courts and so forth.

Maybe that is something that is, you know, questionable.  But on the other hand as many urine, as many blood sample tests they take, the better.  Then you’re aware that it’s a clean sport and everybody has the same treatment.

Djokovic will play the winner of the Sam Querrey – Stan Wawrinka match in the fourth round.