You are here: Home / Features / Azarenka Survives Injured Hampton to Move into Round of 16 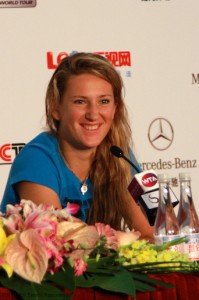 Azarenka cruised to a 5-1 first set lead which Hampton narrowed to 5-4 only to be broken to give Azarenka the first set 6-4.

The second set began with three straight breaks of serve to give Hampton a 2-1 lead. Hampton squandered set points on Azarenka’s serve at 5-3.

At 5-4 and serving for the set Hampton had to call for the trainer for treatment on her lower back. Hampton served out the set 6-4.

In the third set both women held their opening serves and then exchanged breaks for 2-2.

The 63rd ranked Hampton appeared to be in pain a number of times after the medical time out. During the third set she had tears in her eyes.

“Going into the match I was fine,” said Hampton.  “About 4‑2, 4‑3, my back started hurting.  I had back problems.  Hurt my back last year at the French Open pretty badly.

“It’s something I deal with day‑to‑day, and, yeah, it was hurting.  Normally when my back starts hurting I start cramping.”

Hampton revealed after he match that she has two herniated disks in her lower back.

The Belarusian held serve and broke Hampton for 4-2 and gets out a 0-40 jam on her serve to hold for 5-2. Azarenka broke serve again to clinch the set and the match 6-2 in two hours and nine minutes.

“It was definitely tough. “ Azarenka said of the three-set match.  It’s always good to know, you know, you battle through not playing well, not feeling great.  It’s important, you know, to be alive in the tournament.

“Towards the end things were going better for me.  I’m glad about that, but definitely she played an outstanding match.”

“I was pretty confident,” Hampton said about going up against the top player in the world. “I didn’t go into the match thinking that I was going to lose.  I went in with a lot of belief.

“And even though in the first set she won it 6‑4 and was up at one point I think 5‑1, we had some good exchanges.  There was just a point here or there that was costing me the games, so…”

“I put in a lot of hard work during the off‑season, so I was not surprised,” Hampton added.

“I think she surprised everybody a little bit today,” Azarenka said of Hampton’s play.

“I didn’t really see her play before, but my coach watched and he said she didn’t play like that other matches that he saw.

“But she definitely, you know, went for everything there was today.  And I know the same feeling when you go and you have nothing to lose.  You’re so loose, you’re free, and you feel like you can’t miss it.