You are here: Home / Features / Serena Williams Moves Past Morita into Round of 16 at Australian Open 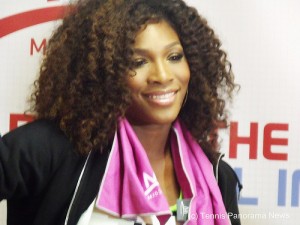 (January 19, 2013) Serena Williams won the last six games of her match to stop Japan’s Ayumi Morita 6-1, 6-3 in the third round of the Australian Open.

The veteran 31-year-old American, who is looking for a sixth title at Melbourne Park and a third consecutive major title, was 3-0 down in the second set  to No. 72 Morita after suffering her first service break of the tournament before surging to win six games in a row.

“I thought she played really well, “Williams said of her opponent. “She played at a level higher than I expected so it took me off guard.  She was just consistent, really consistent.”

Williams discussed how she fells going into the second week of the tournament:

“I feel today was actually a really good match for me.  I was involved in a lot of longer points, something I definitely wanted.

I feel good.  I hope I can keep this level up and go higher.

“My job is to do the best I can, “Williams said of the match-up.   “Maria is playing consistent tennis, especially the past 16, 18 months, she’s been so consistent.  So my goal is just to be really focused against such a player that’s doing so well.”