You are here: Home / Features / Stephens Beats Robson in Battle of Teenagers at Australian Open 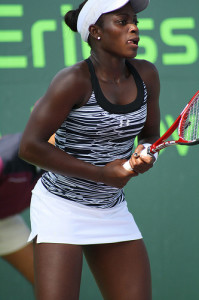 (January 19, 2013) Before a very pro-Robson crowd, American Sloane Stephens won the battle of the only two teenagers left in the women’s draw on Saturday at the Australian Open. The 19-year 29th seed defeated Great Britain’s Laura Robson 18, 7-5, 6-3 in one hour and 49 minutes.

Stephens ran out to a 4-0 first set lead knocking winners past Robson at will. Robson won the next four games to make it eve. In the fifth game, Robson was treated for a shoulder issue.

“I felt something in my shoulder yesterday, but we still don’t know what it is because I haven’t had time to see the doctor or anything yet,” Robson said.

The medical time out seemed to deflate Stephens’ momentum as her attacking game turned into a passive retrieving one. Robson turned into the aggressor.

Stephens had two set points on Robson’s serve at 5-4 but could not covert. The American did convert at 6-5 when Robson fired a backhand wide.

Serving for the match at 7-5, 5-3, Stephens had to save two break points before sealing the victory.

“It was super intense” Stephens said describing the match.  “I think there wasn’t a point where there wasn’t something like, Oh, my goodness, this is intense.  I was up like 4‑0, 4‑All.  We had some pretty intense games.  That’s what it’s about, getting out there and getting after it.”

“Laura and I are good friends.  She’s obviously a good player.  We’re going to have a rivalry, all that good stuff.”

Stephens, who also beat Robson in Hobart last week, will play either 42-year-old Kimiko Date-Krumm or Bojana Jovanovski for a place in the quarterfinals..

“Date, that’s funny, because they were saying she could be my mom, which is like kind of weird, “ Stephens said of potentially playing Date-Krumm.  “It would be like playing one of my mom’s friends, which is kind of, hmm, not so fun.

“But, yeah, I have seen her a couple of times, Jovanovski.  Sort of kind of the same age as me.  She’s a little bit older.”

“Just another match.  Just got to go out and play my game.”