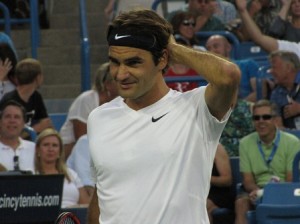 Tomic played well during the encounter but was outclassed by a Master. The telling statistic was unforced errors, the young Australian committing 36 compared to just 20 from the Swiss maestro.

I thought it was a good match overall. I thought the intensity was good. We had tough rallies. The crowds were great. So I really enjoyed myself out there.”

“So I’m just really pleased that the outcome is what I was hoping for. I’m happy also with my playing. I thought I played really good today. That’s obviously important looking ahead.”

In a day attendance record for the tournament of 80,735 patrons, the patriotic crowd was hoping for a big upset from their charge. They urged him on throughout the match but paid due respect to the 17-time Grand Slam champion as he crushed the last remaining Australian hope in the main draw.

Federer created 16 break point opportunities in the match, Tomic saving 13 of them as evidence of his improved service games.

Federer said he thought Tomic had improved from the last time they had played and expects to see him rise in the rankings over the next couple of years.

“He’s obviously played today’s match very differently than he did play the last couple matches I played against him. Yes, I would think so. He has improved. Obviously he played me so different that it’s hard to judge because I’ve never seen him play offensive tennis against me in the past. So now it’s just a matter for him to keep it up. That’s the proof he’s the much improved player.”

Federer came to the court ready to play fast aggressive tennis against the young pretender and broke Tomic in the first game of the match. It was the only break he needed and won the first set 6-4.

The Australian put the pressure on in the second set and held serve with Federer to force a tie-break. Tomic got the mini-break early in the tie-break but the Fed-Express came back and rallied to win it 7-6(5).

In the third set Federer got the break early and ran with it, closing out the match 6-4 7-6(5) 6-1 and moving through to a fourth round meeting with big serving Canadian Milos Raonic.

“He’s obviously got one of the best serves in the game. Up-and-coming. So you always feel, especially after an off-season like the one we’ve just had, he’s maybe improved again a few

things or he’s worked on a few things. So you would expect maybe some more unexpected stuff that he didn’t do last time around. We’ll see how it goes. I’m excited about the match anyhow.”