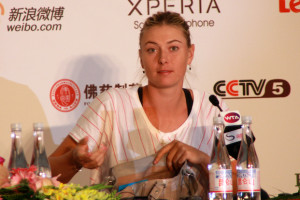 (January 20, 2013) MELBOURNE PARK, Australia – Kirsten Flipkens became the next victim in Maria Sharapova’s mission for a second Australian Open title on Sunday, the second seed demolishing her Belgian opponent in straight sets 6-1, 6-0 to progress to a quarterfinal clash with fellow Russian Ekaterina Makarova.

Sharapova was clinical in disposing of Flipkens, smashing away 25 winners and succeeding on 81% of first serves in play.

The second set was a 25 minute thumping and the fifth bageled set of Sharapova’s tournament.

She was understandably pleased following the easy victory, and said the key to continuing in the winning manner is to remain focused and to stick to your game.

“All of a sudden, especially in women’s tennis, things can change really quickly. It’s really about, you know, sticking to your game plan, being consistent, but playing your game.”

“You know, I didn’t start the match really great. I was facing a different type of opponent today and I was making a few more mistakes than I would have liked in the beginning.”

Sharapova plays Makarova in the quarterfinals who today defeated fifth seed Angelique Kerber 7-5 6-4 to progress into her second consecutive quarterfinal. Makarova is relishing the opportunity to play the second seed in a rematch of their 2012 Australian Open quarterfinal in which Sharapova won in straight sets 6-2, 6-3.

“I really want to play against Maria because I lost against her last year. I’m feeling really confident in my game.”

Elsewhere in day seven action, China’s Li Na defeated eighteenth seed Julia Goerges in straight sets. The first set was a tight encounter that lasted almost one hour with the sixth seed closing it out in a tie-break 7-6(6). The second set was was easier for 2011 Australian Open finalist as she won it 6-1 and progressed through to a quarterfinal appearance against fourth seed Agnieszka Radwanska.