You are here: Home / Contributors / Djokovic Survives Mighty Challenge From Wawrinka to Advance to Quarterfinals 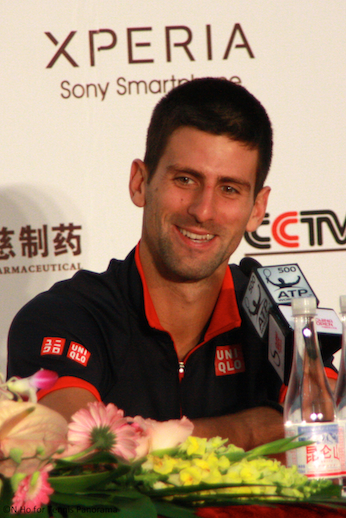 (January 20, 2013) MELBOURNE PARK, Australia – The Australian Open produced it’s greatest match of 2013 and one of the best in recent times as Novak Djokovic triumphed over Stanislas Wawrinka in a five hour and three minute thriller on Rod Laver Arena that ended just after 1.30am on Monday morning.

The 1-6, 7-5, 6-4,,6-7(5), 12-10 epic was an incredible demonstration of tennis at its best, Wawrinka playing the match of his life and blitzing forehand and backhand winners all over the court while Djokovic proved why he is number one in the world, fighting back from a set and 2-5 down to claw his way to victory.

“I’m very glad to be a winner of another marathon,” Djokovic said after the match. He won the 2012 final against Rafael Nadal in an epic five setter that lasted just shy of six hours and ended in the early hours of the Monday morning.

The match proved to be a war of attrition and it seemed unfair that either player should lose, having poured all of their sweat and tears into the battle. Djokovic said that matches like these are the ones tennis players live and train for and because they are physically and mentally draining players have to be prepared to push to the limits.

“I know I can recover. I know I have it in me. I wasn’t too much worried about the physical part. I was ready for it. I was ready to go the distance, and I’ve done so. Hopefully I can take that day off tomorrow and recover for quarters.”

Djokovic was asked where this match ranked between the other dramatic matches he’s played in.

“Well, it definitely ranks right at the top. One of the longest, most interesting, and most exciting matches I played in my career.”

“You know, he had many chances to be the winner of this match. He had a better start; he had a lot of break balls in the third; he was a break up; he was the one being aggressive, being in the court.”

“All the credit to him. I feel sorry that one of us had to lose. He definitely deserved to win.”

Wawrinka came out all guns blazing to begin the match and began smashing forehand and one handed backhand winners all over the court. The Swiss No. 2 shocked the crowd and his opponent as he completely dominated the first set and rushed to a 6-1 lead in just 25 minutes.

Wawrinka again dominated play and fired winners from everywhere in the second set, at one stage leading 5-2. He failed to serve out a two sets to love lead however and let the world number one back into the match, Djokovic rallying to claim the set 7-5.

“And even though when I was 6-1, 5-2 down, I believed that I can come back if I am two sets down. I’ve been in those situations before. I was just outplayed by my opponent. He was better on the court for first hour and a half, no question about it,” Djokovic said after the match. “In this circumstances when you’re not playing the way you want to play, you just try to fight and hope for the best.”

Djokovic’s confidence grew during the third set as he began to play aggressively and force Wawrinka into making errors. Djokovic had momentum on his side and claimed the third set 6-4 in 45 minutes.

The fourth set was a tighter affair culminated in a tie-break situation. Wawrinka managed to get the mini-break early on and closed out the set with a scintillating forehand drive winner down the line.

By the fifth set there was talk of the match being the best of the tournament and a lot of talk about the Swiss’ phenomenal one handed backhands, powerful serve and pounding forehands.

Wawrinka began to cramp coming into the fifth set but continued to play like he had nothing to lose. On many change of ends he was given massages on his thighs from the trainer to keep himself limber and able to continue to match it against the top player in the world.

The unluckiest moment came for the Swiss when he had break point opportunities in the ninth game of the set, Wawrinka deciding not to challenge on his forehand return being called long by the linesman in which television footage of hawkeye clearly showed that it was in. Had he challenged on the visibly questionable call he would have had the chance to serve out the match in the tenth game. Instead he played catch up the entire time as the set remained level with the Serbian serving first.

The players continued fighting strong as the match wore on and at 11-10 in the final set Djokovic had his first opportunities to close out the match. Wawrinka saved the first two attempts but the confidence that comes from winning three Australian Open crowns is what got Djokovic over the line in the end, the match won from a stellar Djokovic backhand cross court winner from the baseline.

To celebrate, Djokovic warmly embraced his opponent at the net then ripped off his shirt as he did in the 2012 final.

Before this match Wawrinka’s defining moment had been his doubles Gold medal at the 2008 Beijing Olympics with countryman Roger Federer. Wawrinka acknowledged the crowd who gave him a standing ovation at the conclusion of the match and cheered loudly for him as he left emotionally and physically wrecked from the court.