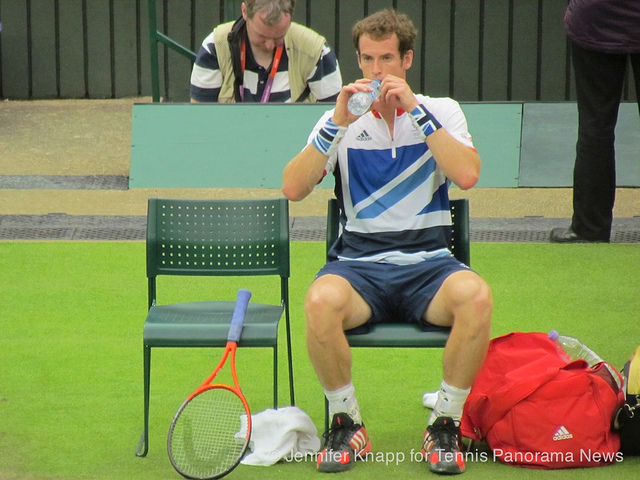 Simon played a marathon five set match against compatriot Gael Monfils in the third round and came to the court already vanquished physically. The third round battle lasted an epic four hours and 43 minutes on Saturday night, while Murray had spent just five hours and 30 minutes in total on court coming into the match. Murray played to the tired legs of Simon, pushing him from side to side and wearing him into defeat.

Murray won the first two sets 6-3, 6-1 and midway through the third set his opponent began to cramp and appeared to lose all interest in sticking the match out. Simon picked up his service however, holding easy to trail Murray 3-4. Murray put the foot down in the next game to hold to love and broke Simon for a second time in the set to take out the match.

“I felt after the first few games, because he wasn’t serving hard at all, you know, his forehand side wasn’t moving that well either.  It was just about trying to finish the match as quickly as I could and then getting ready for the next one.”

Jeremy Chardy continued his career best run at a Grand Slam as he defeated Andreas Seppi in four sets 5-7, 6-3, 6-2, 6-2 to move through to his first quarterfinal against Murray on Wednesday.

Chardy won the last previous meeting between the two in Cincinnati last year but Murray leads their head-to-head 4-1.

“The Cincinnati match was disappointing from my side.  I normally play quite well against him.  But he’s playing good tennis.  I mean, he’s had some big wins this week.  He serves well.  He’s very aggressive off his forehand.  His backhand is his weaker side, for sure.  He hits a lot of slice, doesn’t come over it too much.  He likes to come forward.”

“He can be erratic.  But when his game is on, like it’s been the last few rounds, he’s a very tough player to play because he doesn’t give you too much rhythm.  And, yeah, he really goes for it.”