You are here: Home / Contributors / Serena Williams Steamrolls into Quarterfinals in Melbourne 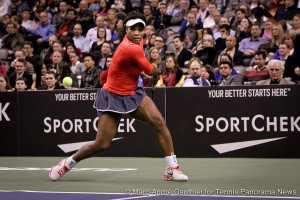 (January 21, 2013) MELBOURNE PARK, Australia – Serena Williams destroyed Maria Kirilenko in their fourth round match at the Australian Open, Williams with 87% of first serves in and creating 22 winners on her way to the 57 minute, 6-2, 6-0 thumping.

“No, I definitely have never hit that high of a percentage because I take a lot of chances with my serve.”

“It was good. But I really want to be able to keep it up.”

Williams progressed into the quarterfinals and extended her current winning streak of matches to 20. She has also increased her chance of regaining the world number one title with the win, Azarenka and Sharapova both needing to make the final if they are to have any chance of claiming top spot ahead of Williams.

The winner of five Australian Open titles experienced little resistance from her opponent tonight and was understandably pleased with her performance after the match.

“I was surprised. I felt like Maria played really well. I was just trying to play well, just to keep up.”

Williams plays compatriot Sloane Stephens in the quarterfinal and has played a mentor role for  the young American. She believes she has what it takes to make it to the top in the sport.

“No. I took a lot from that match. She plays well. Like I said after the match, she can be the greatest player.”

“I feel like for me it will be another good match and a good opportunity for both of us.”

“Definitely one of us will be in the semifinals, which I think is awesome. So it’s going to be good.”