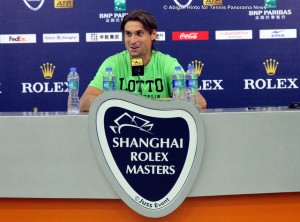 Ferrer is just the second Spaniard behind Rafael Nadal to reach multiple semifinals at the Australian Open and the third Spaniard to reach five or more Grand Slam semifinals in the Open Era. The win also signaled his 500th career win.

The first two and a half sets were dominated by the tenth seeded Almagro as he shocked the crowd by taking an aggressive two sets to love lead 6-4, 6-4 by serving powerfully and smashing winners from all over the court.

He continued the form into the third set as he broke Ferrer with the set level at 3-3 and had a chance to serve out the match at 5-4. Ferrer dug deep however and created three break point opportunities with Almagro serving for the match, the first saved with an ace and the second with a forehand volley winner for deuce. On his third opportunity Ferrer hit a superb forehand winner to break back and level the match at 5-5. With Almagro rattled, Ferrer won his next service game and broke Almagro in the next game to love to win the set 7-5.

The Spaniards traded breaks throughout the fourth set and with his nose ahead at 5-4 Almagro had another opportunity to close out the match. He squandered the game again to allow Ferrer back in the set at 5-5. By this stage his failure to serve out the match on two occasions appeared to play heavily on Almagro’s mind. He had a third opportunity to serve out the match after breaking Ferrer for 6-5 but again failed to do so and sent the set to a tie-break. Ferrer got ahead in the tie-break and won the set 7-6(4) to level at 2 sets all and sent the match to a decider.

In the fifth set Almagro began to struggle physically and had issues with his abductor while Ferrer was running on momentum and had full control on the match. He got the first break in the fifth game and a second in the seventh game and served out the match with a forehand winner.

Ferrer increased his head-to-head lead over Almagro to 13-0. He was asked what was going through his mind when he was down two sets and a break with Almagro serving for the match.

“I try to fight every point, every game. I know all the players in important moments we are nervous. I know that. I try to do my best. Today I was close to lost, sure. But finally I come back, no?”

“I think he played better than me in the first set. There was a break. I play bad in myself in one break. In the second, I didn’t play good, no? In the third, I feel better with my game. I can play more aggressive.”

“And in the fifth, he was cramping, problems with his leg, so it was easier for me.”

On a potential semifinal clash with  Novak Djokovic, should he defeat Tomas Berdych on Tuesday night, Ferrer said, “Amazing player. Of course, Novak, he’s the No. 1 of the world. He’s the favorite for to win the Australian Open. I will see the match tonight. Anyway, I will have to play better than today for to win after tomorrow, sure.”

“You know, every day is different: the weather, the conditions, everything is different. I don’t know what is going to be tonight with Tomas Berdych, but I hope it will be a long match, no (smiling)?”