You are here: Home / Features / Djokovic Fighting Fit With Win Over Berdych in Quarterfinals 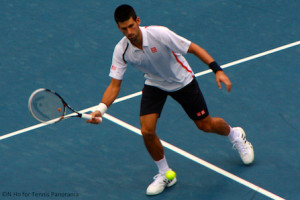 Djokovic is guaranteed to retain his No. 1 ranking at the end of the tournament after advancing to the semifinals. Had he lost on Tuesday, Roger Federer would have had the opportunity to regain the No. 1 ranking if he had gone on to win the title.

Djokovic played with a lot more rhythm than he did against Stanislas Wawrinka in the epic five set encounter on Sunday night, hitting the ball cleaner and playing consistently aggressive. He smothered Berdych’s big serve, taking the initiative and shutting down the balls quickly.

It was clear Djokovic wanted to get the match over and done with in rapid fashion so as to avoid a repeat of his last round. He raced to a 6-1 first set in 28 minutes as Berdych struggled to make any impact, double faulting on set point down to gift the defending champion the set.

The Czech came back in the second set breaking Djokovic in the first game and served the set out 6-4 in 54 minutes despite some resistance from the world number one in his final service game.

In the third set Djokovic put the foot down and began whipping forehand winners past his opponent and lead 5-0 before Berdych got his first game on the board for 1-5. The world number one then closed out the set 6-1 to get his nose ahead in the match two sets to one.

Djokovic got the early break in the fourth set and went on to close out the match 6-1, 4-6, 6-1, 6-4 to move into the semifinals and continue his quest for a third consecutive Australian Open title.

“I felt good enough to go another five hours. But I definitely wasn’t thinking about it. I tried to get the work done as fast and efficient as possible. I was very happy with the way I started the match. Very aggressive out there, going for my shots, which wasn’t the case against Wawrinka.    So it’s a good improvement and very encouraging for next match.”

Djokovic plays fourth seed David Ferrer in the semifinals on Thursday and leads their head-to-head record 9-5. Djokovic was asked what he needs to do to defeat the Spaniard.

“Well, I need to be aggressive on the court, that’s for sure. I need to step in and try to be in control of the match, otherwise he makes his own rhythm, he makes his own pace on the court. That’s where he’s very dangerous. He’s a great competitor. He’s somebody that has a lot of respect from all the players because he’s playing so many tournaments and works very, very hard.”

“You can see because he’s basically in his 30s one of the fittest players around and is playing the best tennis of his life in the last 15 months. It’s the semis of a Grand Slam, so I expect a tough match.”