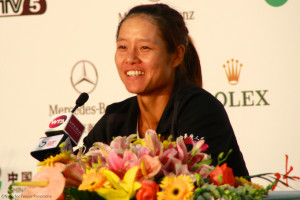 “Beginning of the match I was nervous, ” Li Na said. “I was happy I come back to semis again, but for some reason I really want to win the match. I don’t know what happened today. Just come to the court, feeling like, Okay, just do it,”

She played focused and used all her power to wipe Sharapova off the court. Li produced an uncharacteristically low number of unforced errors at just 18 and created 21 winners in the match.

The 2008 champion got off to a terrible start by serving down two consecutive double faults. She was put under pressure from Li and netted a forehand on break point to give the Chinese the lead 1-0.

Li continued to keep the pressure on the Russian, speeding up the balls and forcing Sharapova to make the errors. She lead at one stage in the set by two breaks before Sharapova managed to get one back to trail Li 2-4. Li then put her foot down again and reclaimed the break to serve out the set 6-2 with a superb forehand winner.

Sharapova had dropped just nine games on her way to the semifinal clash and was suddenly down a set. She had yet to experience a challenge in any of her five matches and did not play any matches coming into the open after withdrawing from Brisbane. Li on the other hand was more prepared for the hot conditions at Melbourne Park on Thursday on the back of a lot of match play coming into the Open. She won in Shenzhen for the first week of the 2013 season and played to the semifinals during a Sydney heatwave.

The second set began on serve for the first four games before Li pulled ahead to 3-2 with a break. She then secured another break in the seventh game and closed out the match 6-2 6-2 to book her spot in the final of the Australian Open for the second time in her career.

Li made the Australian Open final in 2011 and lost to Kim Clijsters in three sets. She looks back on that experience and says she is better prepared the second time around.

“I mean, 2011, first time to the Grand Slam final, I was a little bit shocked because I didn’t know what I should do. Also no one tell me what I should do on the court. But this time I got more experience, so I think should be better.”

“I really hungry about title, yeah. It’s really – how you say – first time I was feeling I really near or close to the title. So, yeah, I think this time should be, I don’t know, maybe different story or maybe same story. But I will try.”

Li Na said she has a different mindset on the court now. She no longer worries as much as she used to.

“I was working so hard in winter training. I think now is everything just back to me. So I come to the court, take the racquet, enjoy the tennis, yeah.”

Li Na will meet defending champion Victoria Azarenka in the final on Saturday. Azarenka leads their head-to-head record 5-4 and has beaten Li in their last four encounters. Li has won their two encounters at Grand Slam level in straight sets at the 2011 Australian Open and the 2011 French Open which she went on to win.