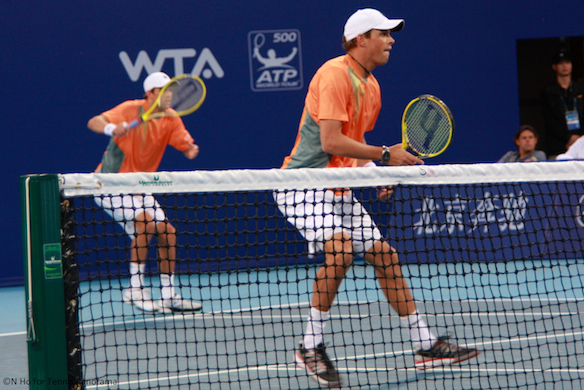 (January 24, 2013) MELBOURNE PARK, Australia – On semifinal day for the men’s doubles top seeds Bob and Mike Bryan won through to their ninth Australian Open final after defeating the Italian pairing of Simone Bolelli and Fabio Fognini in three sets.

Considered the greatest doubles team of all time, the Bryan brothers will be vying for their sixth Australian Open title and will compete against the Dutch duo of Robin Haase and Igor Sijsling in the final. The dutchmen knocked out the third seeds in Spaniards Marcel Granollers and Marc Lopez in a tough straight sets encounter.

The semifinal lineup for the mixed doubles competition was also completed on Thursday. The pairings of Kveta Peschke/Marcin Matkowski and Yaroslava Shvedova/Denis Istomin had progressed through to the semifinals on Wednesday and they will play the pairings of Lucie Hradecka/Frantisek Cermak and Jarmila Gajdosova/Matt Ebden respectively.

The women’s doubles final will take place on Friday before the Roger Federer versus Andy Murray semifinal clash and will see the surprise Australian pairing of Casey Dellacqua and Ashleigh Barty take on the top seeds Sara Errani and Roberta Vinci.