You are here: Home / Contributors / Murray Victorious in Thriller Against Federer, Meets Djokovic in Final 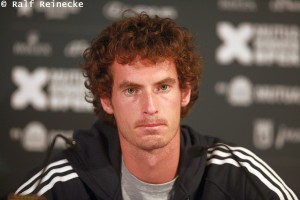 The win gives Murray a third tilt at the Australian Open crown when he meets world number one Novak Djokovic in the final on Sunday.

Coming into the match Murray had never beaten Federer in a major before, even though he held a 10-9 lead in their head-to-head.

The match was a contest of grit, determination and shotmaking brilliance. Murray played out of his skin for much of the encounter, stepping into the court and taking the balls early. Federer was on the back foot for the majority of the match but summoned all of his mettle to push Murray and go the distance. A stunning display of winners flew from both racquets as the match wore on but it was Murray who executed more with 62 winners overall and produced 13 less unforced errors than the 17-time major winner.

In the first set Murray managed an early break in the third game by forcing a Federer forehand error and it was all he needed to close out the set on serve 6-4.

In the second set Federer put a lot of effort into holding his serve but was not able to make an impact on his opponent’s. He tried to change the pace of the ball and bring Murray into the net more to take him off guard.

The set went to a tie-break as neither player was able to set up a break point opportunity the entire second set. Federer lead the tie-break early but Murray came back a few points later. Federer then upped the ante on the eleventh point with a scintillating backhand pass to gain another advantage and then sent down a superb serve that Murray could do nothing with to claim the set 7-6(5) and level the match.

Halfway through the third set Murray started to swing freely and really brought the pressure to Federer. He played very aggressive and took advantage of Federer’s second serve by pouncing on it early and shutting away winners. He claimed a break in the sixth game and then served out the set 6-3 with an ace.

Federer continued to feel the pressure on his serve in the fourth set but managed to hold his first game. In the fourth game Federer set up 3 break point opportunities, Murray saving two with strong serves but he couldn’t save the third, gifting Federer the break after sending a forehand wide. The Swiss then consolidated the break and lead the fourth set 4-1 before Murray fought back and broke Federer back in his next service game with a stunning forehand winner.

At this stage of the set Federer was just feeding the ball to his opponent rather than looking for holes to pounce on and allowed Murray another break to lead 6-5 and attempt to close out the match. Murray clammed up while trying to serve it out and gifted the break back to Federer to force another tie-break. Federer produced some glimpses of brilliance and sent the match to a fifth and deciding set 7-6(2) with a superb serve.

Federer shanked a backhand in his first service game on break point down to give Murray the lead in the final set 2-0. He looked as though he’d spent all of his energy getting to the fifth and was left with little to continue his push in the match. Murray maintained a high intensity for the remainder and lost just 3 points from 19 on serve on his way to victory.

“Obviously I was happy. It was a tough match. A lot of ups and downs,” Murray said in his post match news conference. “So it was good to come back after the way I lost the fourth set.”

“I think I did all the things I needed to do. I did them well. Even, like I say, after the second and fourth sets, which were tough to lose, because, you know, I wasn’t comfortable, but I was in, you know, good positions in both sets.”

“To lose them was tough. I was just happy with the way I responded after both those sets.”

Federer was making no excuses as to why he lost.

“I think overall he probably created more chances than I did. I had difficulties finding — you know, getting into his service games time and time again like I, you know, usually do against him,” Federer explained. “I think he started off serving well, and then, I mean, fifth set, obviously he did well. I think he played a bit more aggressive because he did create more opportunities over and over again.”

Djokovic leads the head-to-head against Murray 10-7 but Murray achieved a momentous win over the world number one at the US Open last September, defeating him in a thrilling five set final for his first Grand Slam title. When asked whether having won that title against Djokovic will help him mentally for Sunday, Murray said: “I would hope so. The task isn’t any easier. I’m obviously playing Novak again on this court. I mean, this has been his best court for sure. So I’m aware of how tough it will be to win the match and what have you.”

Federer says he thinks Djokovic will come up trumps on Sunday.

“He’s done really well again this tournament, digging himself out of the hole against Stan, coming and playing good tennis against Berdych and Ferrer. So obviously a tough match again, and give a slight edge to Novak just because of the last couple of days.”

The final will take place on Sunday evening after the Mixed Doubles final.