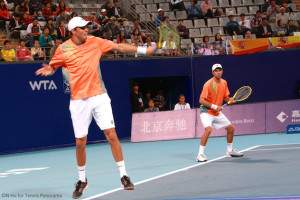 The Bryans become the most successful doubles team in history after the win, surpassing the 12 title haul of Australian legends’ John Newcombe and Tony Roche.

The twins said the statistic was not on their minds while they were playing.

“We weren’t thinking about it much out there, but now that we have it, it’s going to be fun to look back on our career and say we have the most Grand Slams. It’s a big record, so we’re pretty excited about it,” Mike Bryan explained.

When asked what other big achievements were left for them to strive for Bob Bryan said: “As far as records, there’s not much. But like we’ve told you before, we’re competitors. We hate to lose. We want to finish No. 1.”

“That’s just the way we are. We set goals to get better, to improve, and to play well at these big tournaments. That’s why we’ll be out here for the next few, three, four more years.”

The win is also the top seeds’ sixth Australian Open title out of nine final appearances. Mike Bryan explained why he believes the Australian Open has been their most successful major.

“Hard court. I think we’re basically hard court guys. I mean, we grew up in California. We’ve won six of these, four of the Open, only three at Wimbledon and the French. We always say we’re clay court guys.”

Bob Bryan added “Yeah. I also think it’s coming down here fresh, spending the off-season together, training hard, feeling like we put in the work, having a clean outlook, always wanting to start the year on top, kind of show the other guys that we’re still here, you know.”

Next on the Agenda for the brothers will be the Davis Cup World Group first round tie against Brazil in Jacksonville, Florida. The Bryans have not lost a Davis Cup doubles rubber since losing to the French pairing of Arnaud Clement and Michael Llodra in the World Group quarterfinals in 2008.

“It would be nice to win another Davis Cup, to have a couple of those once we retire. You know, we’re really focusing on that,” Mike Bryan said. “Yeah, we’re really excited about Davis Cup. We have a great draw this year.”