You are here: Home / Features / The Wit and Wisdom of Li Na – 2013 Australian Open Edition

( January 27, 2013) Some people call her “Nails.”  In her home country they refer to her as “Golden Flower” or “Big Sister Na.” She is Li Na of China – 2011 Roland Garros champion and  2013 Australian Open finalist, who fell to Victoria Azarenka on Saturday in Melbourne. Li will be ranked No. 5 in the world when the WTA rankings come out on Monday, January 28, 2013.

The 31-year-old who first turned pro in 1999,  has won seven WTA tour level tournaments. She became the first player from an Asian country to appear in a major singles final when she lost to Kim Clijsters in the 2011 Australian Open.  Her career-high singles ranking of No. 4 came in June 2011, the same month when she won her first and so far only major, the French Open.

One of the many joys in covering tennis is attending a Li Na news conference. In these days of media training for all of the players, they are conditioned to give the media “cookie cutter” answers to questions. Not so with Li.  Her answers are candid, refreshing, usually entertaining and come from the heart. Sure, her English is not perfect, but she is well understood.

Chatting with her is like conversing with your “cool” older young-adult cousin who doesn’t care what she says, but is honest without being insulting and makes you laugh in the process. It makes me wish I could speak Chinese so I could understand her news conferences with her home country journalists.

When I was media in Melbourne last year, I never missed seeing Li in action with the media, whether in person in the main interview room or viewing her through my workstation in the media center. Even though I was not in Melbourne this year, I made a point of watching all of her news conferences and reading all of the transcripts. I actually do this for every tournament she’s in, if I’m able to get video and /or transcripts – she’s just that entertaining.

I hope more players take after her “media” skills. She has a journalism degree from Huazhong University of Science and Technology. Perhaps when her on-court tennis career is over she can become a member of the tennis media? Wonder what type of questions she’d pose to the players? But with 31 being the new 21 in the tennis world,  she’ll turn 31 on February 26, I think Li is far from retirement.

Here are some of the more entertaining portions of Li Na’s news conferences throughout the Australian Open fortnight:

Q.  There was a controversy in the semifinal between Sloane Stephens regarding medical timeouts.
LI NA:  Hey, this is real injury.  Everyone can saw that.

Q.  Have you ever called a timeout like that? (Asked in reference to Victoria Azarenka calling for a medical timeout near the end of her semifinal win over Sloane Stephens.”
LI NA:  If I’m injured, yes.  If no, not. 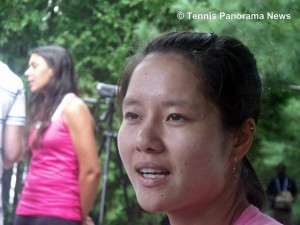 Q.  Do you remember the first time you saw yourself on a billboard or in the airport?  Can you talk about what that experience was like for you?
LI NA:  I say, Okay, I know this girl.  No, because, I mean, first time I was a little bit afraid to watch.  I was feeling like, Oh, it’s real.  Because sometimes you think it’s different when you watch.
First time was like, Ah, like this.  And then I look, Okay, okay, it’s you, so don’t worry about.
After the team or the friend say, I think I know this one.  I was like, yeah, yeah, yeah, me, too.  Yeah.

Q.  Do you remember when that was, the timing of that?
LI NA:  I think the huge big one was in French Open, after.  Yeah, because next day I was back to Germany, so I saw in the airport.  I don’t know if it BBC or CNN or something news like   how you say   24 hours.  I mean, Why?  I just win title.  I just go and everyone saw.
Also funny thing is I was bought economy ticket because just so short.
They come and say, We know you just win tournament, so move to business.  I was, Oh, is not bad. 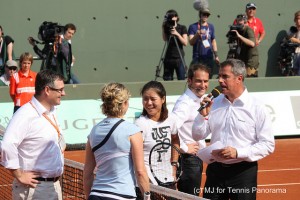 Q.  Yesterday Jo Wilfried Tsonga was asked why top seeded women’s players lose more than the top seeded men.  He said because of hormones, because women are more emotionally unstable.
LI NA:  And then?
Q.  Do you have any thoughts on that?
LI NA:  I mean, but for all of the world, why should the man marry for the women?  It’s, how you say, different thinking.  Women’s tour is women’s tour; men’s tour is totally different.  So nothing prepare for that.
Q.  You don’t think hormones have anything to do with it; you think it’s more about tennis?
LI NA:  Sorry about that.  Now I’m only interesting about tennis.  Maybe when I retire I’m thinking about the hormones one day.
Q.  Do you have a theory on why there’s sort of upsets at the top level in the women’s game as opposed to the men?
LI NA:  I mean, if I’m retire, I will go to university to learn this thing and I can answer you.
Sorry about that.

Q.  Do you feel calmer on the court these days, and why do you think you’re feeling more calm?
LI NA:  Getting a little bit old, getting more experience.  Right now I really   how you say   enjoy for every match.
Also I was working a lot this point in winter training, as well.  Carlos always say, Calm down, calm down.  All the day I was listening too much, like, Calm down. 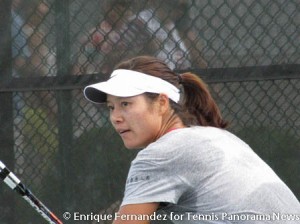 Q.  This is your third semifinal here in four years.  Why do you think this is your best slam?  This seems to be your best slam.  Do you agree?
LI NA:  Yes, I agree.
Q.  Why do you think it is?
LI NA:  I mean, I don’t know.  Every time I was come here I was feeling, I don’t know, just something around with me.  It’s not wrong.
I don’t know.  I mean, maybe I like the court.  Maybe.
Q.  Do you think it being the beginning of the year also helps for you?
LI NA:  What do you want to say?
Q.  I’m saying you work hard in the off season.
LI NA:  I working hard all the year (laughter). 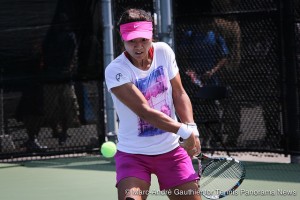 Q.  What sort of stuff was he (Coach Carlos Rodriguez) doing to you?  How difficult was the pre season?
LI NA:  I mean, you know, before I was always training in gym for the winter training because I have to see the doctor for my knee.
So last time I was stay two weeks in Germany still for to check the body.  I was with Carlos for two and a half or three weeks in Beijing.  Totally different program, you know.
He was not   how you say   like every day five, six hours, but not only for tennis.  Tennis like maybe two, three hours, but fitness for two, three hours as well.
So, like, when first time I was training with him I was so exciting, but after three days I was dying.  Yeah, because my husband didn’t come with me in Beijing.  I call him and say, Carlos is crazy.  He was like, Why?  I was say the program to him.  He was like, Don’t make the joke.  I say, Hey, listen, I’m not joke.  I really doing this in the morning.
He said, Okay, okay, I will come to you next day.  So next day he was in Beijing.  I was doing some exercise with Carlos.  He was sitting in the gym.  After halfway, he was like, Are you finished?  I said, No, only halfway.  He said, What?  I said, Really, yes.  I do this for three days already.
He said, I’m tired.  I say, Don’t say that.  I’m doing exercises, you’re only sitting.  Don’t say you’re tired.
Yeah, but Carlos   how you say   he was very nice guy but also is tough.  I have to finish all the program.  He will say, Let’s go, continue, with smile.  I can’t say anything.  I have to continue until finish.
Q.  Did you think about quitting at some point, stopping your work with him?
LI NA:  After three days I was really tired.  I was call my husband, I say, I really want to retire.  I say, Now only three days; how be I can continue for three weeks or all the year?
But I think he’s good because you can see until now, I mean, it’s not bad, yeah. 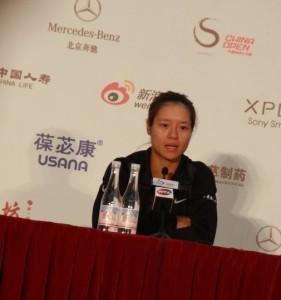 Q.  Maria Sharapova has only lost five games in her first four matches.  Have you been able to see any of her?  What do you think about playing somebody who is playing that well?
LI NA:  At least now I’m in the semis.  She has to play, so…  Right?
Now I can start now to enjoy my day.  She has to fight, yeah.  So that’s better.
The match is on Thursday, so I still have the time to recover.
Q.  If you play her, who do you think Max will root for? (Max Eisenbud is the agent for both Maria Sharapova and Li Na.)

LI NA:  I think Max just eat sugar and be somewhere else.  You couldn’t find him.  Be just like, Oh, good shot, you know.  Yeah, this is Max.  He is going to change something. 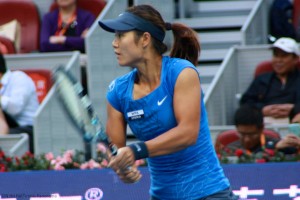 Q.  On court you mentioned since your husband stopped coaching you you have a better family life.  Could you tell us a bit more about that.
LI NA:  We always have good communication.  I mean, just coach and husband is   how you say   tough to find a balance.  He was doing very good job.  But between like husband and the coach for us, both of us, is very tough, yeah.
Because sometimes, you know, if he say, We should do something, I was feeling, I’m tired.  You’re my husband.  Why should you be training me so tired.  But I forgot he’s coach as well.  That’s why sometimes we have to fight, we have to shouting.
The funny thing is I think two years ago, China, someone say I was divorced.  They was asking me.  Because they thinking we always like shouting, maybe we divorced.  They ask me, Li Na, we hear you are divorce.  I say, Already two years, don’t worry about that.
I really have to say I have the same husband for long time, so don’t try to push me down.  Even one day we are didn’t love anymore maybe we should divorce.  This is the life.  We couldn’t always together. 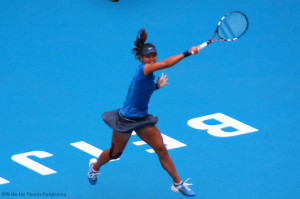 Q.  Many of the players have a particular rival that they see as their main rival.  Who do you see as the biggest rivalry you have in tennis?

Q.  In this tournament there are four Chinese females in the main draw and one qualifying male.  Similar proportions in the juniors.  In China, is tennis more attractive to the females than the males, do you think?
LI NA:  They are here.  You can ask all of them.  Because for me, I mean, I was traveling all of the world to play some tournament.  I really can get some information, I don’t know, maybe from Internet or from newspaper.  But all the information from them, you know, so you can ask them.  (Smiling.)

Karen Pestaina is the founder and Editor-in-chief of Tennis Panorama News. She’s worked as a member of the media in the New York City market since her teenage years and tries never to miss a live Li Na news conference when she’s covering tennis tournaments. Follow her and the site on twitter @TennisNewsTPN.