You are here: Home / Features / Brazil Stays Alive As Melo and Soares Upset the Bryans in 5 Sets 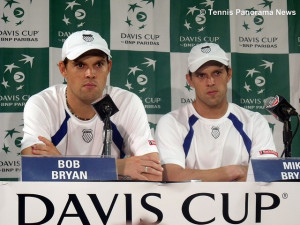 (February 2, 2013) JACKSONVILLE — On Groundhog Day here in the United States, the conventional wisdom was that the world’s top-doubles team would clinch a first round Davis Cup World Group victory and ensure a long winter for Brazil’s team.

But as any Brazilian will tell you — it’s actually summer south of the Equator, and it’s not over yet.

Serveral hours after the American weather groundhog Punxsutawney Phil failed to see his shadow and predicted an early spring, Marcelo Melo and Bruno Soares kept Brazil’s Davis Cup hopes alive by stunning Americans Bob and Mike Bryan 7-6(6), 6-7(7), 6-4, 3-6, 6-3, in what was a high-quality and intense match. The U.S. now leads the tie 2-1.

For the Bryans — who are coming off their 13th major doubles title by winning the Australian Open — Saturday’s defeat marks only their third loss in 23 career Davis Cup matches.

In the first set tiebreak, Brazil rebounded from a 5-1 deficit and saved three set points on the way to winning the set, shocking the hometown faithful at Jacksonville Veterans Memorial Coliseum.

“It was very important for us ’cause we kept the pressure on them,” said Soares. “You never know, it’s tough to say, but I think if they had won the first set, they would come back really strong, and then it’s really tough to hold them back.”

The Bryans returned the favor in the second set tiebreak by saving four set points — including one as part of a challenge resulting in deadlock at 6-6 — to even the match at a set apiece. It was during the changeover at 6-6 during the tiebreak that Bob Bryan had some words with the Brazilian bench, ratcheting up the intensity level of the match.

“I felt strange Bob’s reaction” said Melo.  “Just running, too close from me, screaming on my ear. I don’t know what’s happened like that, you know. Bob never did this before. We have really good relationship. I have him as a friend. In that moment I got in shock, How Bob did this, is not normal.”

Here’s Bob Bryan’s take on the situation: “Yeah, Davis Cup is an emotional atmosphere. They got passionate after they thought they won the set. I got passionate to them. There were some words said. You know, no hard feelings, no grudges.

It’s Davis Cup. This sort of stuff happens all the time. It didn’t affect the outcome of the match at all. There’s no hard feelings.”

The Brazilians went on to take the third set, and the Americans battled back to win the fourth, putting the Bryans in uncharted territory: Their first ever five-setter in Davis Cup. The turning point in the fifth set was when Mike Bryan double faulted to give Brazil the break and a 5-3 lead. Brazil held serve in the following game to secure the victory, to the delight of fans wearing the green, gold and blue.

“We came here today to fight,” said Soares. “We know we play well together. We never give up. So I think today was just a perfect example how good me and Marcelo can play together.”

Soares said part of Brazil’s game plan was to take away Mike Bryan’s return of serve down the middle. “Mike is one of the best returners in the game. We know we have to mix it up, take chances, serve in a spot that you don’t really feel comfortable, but you got to do it. He can hit any return anywhere. So I think what we tried to do a lot is to play the ‘I’ position and mix it up a lot.”

Soares called the win against the American his best ever in doubles competition.

“Beat Bryans on a Davis Cup World Group in their home. Tough to beat that. Maybe later on our career we hope to have some good wins as good as this one. But this one for me, it’s very special. It’s number one, for sure.”

“Hats off to the Brazilians, said Bob Bryan. I thought they served well pretty much of the four hours. A lot of high-percentage first serves. They were half-volleying well, keeping the pressure on for a long time. We didn’t get it done, and that’s our fault. We came here from Australia and gave it our best effort to get in shape and win this match, and we came up short.

“All the credit to those guys. They’ve beaten us before. They’re a good team. They’re in the mix in the big tournaments around the world. They knock on the door. They beat some other big teams as well. I’m sure we’re going to see them again for many years.”
In response to a follow-up question about the Bryans having any jet-lag or letdown after traveling from Australia, Mike Bryan said the twins felt great and were not mentally fatigued. “I don’t think we executed our best. We could have played a better match. Could have probably played a little more aggressive. But it wasn’t a factor of just winning a Grand Slam and traveling so far.”

The Americans are hoping John Isner will seal the tie when he takes on Brazil’s Thomaz Bellucci in Sunday’s first singles match. A Bellucci victory would force a fifth and deciding match between Sam Querrey of the U.S. and Thiago Alves of Brazil. Querrey is ranked number 20 in the world, while Alves is ranked number 141.

U.S. Davis Cup Captain Jim Courier says he Isner and Querrey are “well-prepared. They come in with three sets under their belt from yesterday which is good for their

confidence, not damaging to their physical fitness. We feel confident in our chances (Sunday). We don’t underestimate the opposition. They gained a little bit of momentum. It will be our job to quell that tomorrow and snuff it out first ball.”
Courier’s counterpart, Brazilian Davis Cup Captain Joao Zwetsch, said his team is going to “come strong” on Sunday and use the doubles victory as added motivation. “We still respecting a lot the American team, like I said all the time this week,” said Zwetsch. “But I guess we are like stronger mentally now to come (Sunday) and fight as we fight (Saturday).”

Junior Williams is a long-time journalist and tennis fan. At a moment’s notice he can give you a list of all the Davis Cup match-ups that would give the US home ties. He is in Jacksonville, Florida covering the Davis Cup first round World Group tie between the United States and Brazil for Tennis Panorama News.