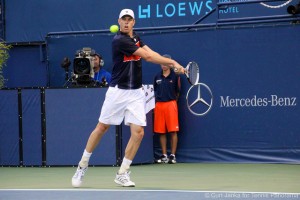 Querrey helps Americans squeak past Brazil and into the Quarterfinals

(February 3, 2013) JACKSONVILLE – The U.S. Davis Cup team avoided a huge upset when Sam Querrey clinched the First Round tie for the Americans over Brazil, 3-2, in a fifth and decisive rubber on Sunday at Jacksonville Veterans Memorial Arena. The U.S. now moves on to the Quarterfinals and will host Serbia and world number one Novak Djokovic in Boise, Idaho.

It looked as if an upset was in the making when Alves took the first set, but Querrey soon found his groove. He began to win the long rallies against Alves, and take a two sets to one lead.

In the fourth set, Querrey was serving for the tie at 5-4, but he failed to convert a tie point and got broken after his overhead smash went into the net, giving Alves new life and the Brazilian fans hope. Both players battled into a fourth set tiebreak, in which Alves sent a shot past the baseline to give the U.S. a 5-3 lead Querrey would not relinquish. His victory gave joy and relief to the few hometown fans who hadn’t left the match to watch the Super Bowl.

“You know, I was just very happy with the way I battled through it,” said Querrey. “Didn’t strike the ball as well as on Friday, but fought through the tough points, made him play, got breaks in the second, third and fourth sets there.

“He broke me back, but then edged him out in a tiebreaker. I was just happy to get through it.”
U.S. Captain Jim Courier said Querrey will benefit from experiencing the Davis Cup pressure cooker. “Sometimes obstacles become opportunities, and that’s what this was today for Sam. John, we thought he was going to get through his match. We thought Bob and Mike (Bryan) were going to get through their match (on Saturday). It came down to Sam, and he stepped up when we needed him to. Sam faced some adversity at the end and played a great tiebreaker to get past not closing it out on serve. Those are learning moments for a player, things you can draw on later on in your career.”

“It was a good effort from everybody, particularly the Brazilians,” said Courier. “They deserve a lot of credit for pushing us and making us come up with what we had to at the end.”

The Brazilian Alves said he was pleased with his level of play during the tie. “So was a great match. Sam is a great player. The first set I got my chance, so I think he was a little bit tense, nervous. After that he start to

Brazil’s Captian Joao Zwetsch congratulated the U.S. team on its victory, but also gave praise to his players for almost coming back from down 0-2 in matches to pull off the shocker.

“Everybody did all the best all the week trying to win this tie” said Zwetsch. “Everybody was like this. When I get on the court, I can feel this energy. I was feeling today. It’s different. I can say to you it’s really different.”
Top-ranked Brazilian Thomaz Bellucci did his part to push the Americans to the brink with his five-set victory over Isner. It was Bellucci’s spin and kick serves versus Isner’s power service game, which included 22 aces.

But the American also committed 81 unforced errors in the nearly three-and-a-half hour match, and appeared to run out of gas in the fifth set — with this being only his second match since skipping the Australian open with a knee injury.
“In the end, I saw that Isner was a little bit tired and I was trying to put every ball inside the court to keep him playing,” said Bellucci.
“I just couldn’t quite win the big points,” said Isner. “It’s almost like I wanted it too badly. I just felt like I was forcing it, wasn’t going for my shots like I should. Confidence-wise I’m not even close to where I want to be.”

Isner also complained about the Brazilian fans, who came ready to root for their favorites with taunts and a number of noisemakers in tow: party horns, kazoos and rubber ducks. “To be honest I don’t appreciate their fans at all. I don’t think they’re too classy at all.” Isner went on to say that the fans are not an excuse for his defeat and that Bellucci deserved to win.
U.S. Captain Courier is now setting his sights on Serbia in the Davis Cup Quarterfinals: “We’re excited. We wanted to face Serbia. We thought that would be a great test for us. They’re one of the great Davis Cup nations right now. Novak is playing again this year after taking last year off. If you want to lift this trophy, you need to beat the best teams, and that certainly is one of them.