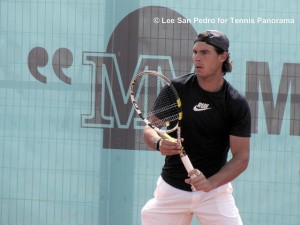 (February 10, 2013) In a battle of left-handers, Argentina’s Horacio Zeballos stopped Rafael Nadal from winning the first tournament of the Spaniard’s comeback on Sunday at Vina Del Mar. Zeballos, ranked 73 in the world stopped the eleven-time major champion and winner of a career 36 clay court tournaments 6-7(2), 7-6(6), 6-4 to win his first ATP World Tour tournament. The win also marks his first ever win over a top 10 player in three tries. He’s the second first-time winner on the ATP World Tour this year joining Bernard Tomic who won Sydney.

Nadal had been off the tour for seven months due to a knee injury.

“It’s a dream for me,” said Zeballos. “To be able to play a final against Nadal was already good enough for me. It’s a moment that will stay in my memory for the rest of my life.”

Zeballos did not get past the the second round at any of the ATP World Tour level tournaments events he played in 2012, but  he subdues  four seeded players on the way to the win – fourth seed Pablo Andujar, fifth seed Albert Ramos, eighth seed Carlos Berlocq and top seed Nadal.

“I’ve worked really hard because I really wanted to be at this level,” Zeballos said. “For some months, I’ve been playing at a high level and I think I’m at the best moment of my career. I’m very strong physically and psychologically.”

From the beginning Zaballos battled with Nadal and kept pace with the Spaniard.

After splitting tiebreaks in the first two sets, Nadal led off the third set with a break at love, but the Argentine answered back with a break. Zeballos took many chances on his service returns. At 5-4 he broke Nadal at love to end the match which lasted two hours and 46 minutes.

The Mallorcan broke Zeballos to love to begin the third set, but quickly relinquished his advantage, allowing Zeballos to get back on serve. The Argentine made more of an impact on return as the set intensified, and at 5-4, he surged ahead to a 0/40 lead. Zeballos converted his first match point to pull off the stunning victory in two hours and 46 minutes.

“It was a great tournament for me, ” said Nadal. “If we take everything, it was positive. It’s true I wanted to win the final but in wasn’t possible. He made things better than me and I didn’t play my best match. I just need to keep working, practicing with hope, motivation and the right attitude to have better sensations every week. I hope it’s the beginning of a lot of good things for me.”

Zeballos became the first Argentine to beat Rafael Nadal on clay since Gaston Gaudio at the 2005 Buenos Aires tournament. He previous did beat two top 20 players – No. 19 Nalbandian (Chile 2011) and No. 11 Gonzalez (Houston 2010). The win snapped Nadal’s 15-match win streak on clay.

Zeballos joins Novak Djokovic and Roger Federer in a very elite club – he has become the third player to defeat Nadal in a clay court final.

Nadal lost two finals in one night as Paolo Lorenzi and Potito Starace defeated Juan Mónaco and Rafael Nadal 6-2, 6-4 in the doubles final.