You are here: Home / Contributors / Raonic Looks To Make History At This Year’s Final SAP Open 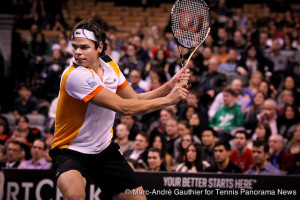 (February 12, 2013) SAN JOSE, California -This is a bittersweet moment as I prepare my preview for this year’s SAP Open.  The SAP Open, the second-oldest tournament in the US, is ending its’ illustrious run with this final week at the HP Pavilion in San Jose, CA.  Many great and legendary players have hoisted the trophy through its’ various names and incarnations.  But whether it was the Siebel Open, the Sybase Open, or whatever, it didn’t matter to those of us in the Bay Area who were grateful for a chance to see world-class tennis. This tournament will be greatly missed!

This year’s edition promises one final hurrah with a great field and the addition of a mixed doubles exhibition match on Saturday, featuring longtime SAP Open stalwart Andy Roddick, 3-time Slam champion Lindsay Davenport, and 22-time Slam champion Stephanie “Steffi” Graf.  Defending champion Milos Raonic is also back to try for an historic SAP Open hat trick.  So even though this is the final SAP Open, it definitely promises to go out on a high.

Here is my breakdown of the quarters as I look for Raonic to make history for the tournament with his third straight title.

The top quarter features top seeded Milos Raonic, who has a chance to pull off a rare “hat trick” win at this year’s SAP Open after title runs in 2011 and 2012.  How rare is it? No player has won three straight SAP Open titles since Tony Trabert accomplished the feat with wins in ’53, ’54, and ’55.  This includes greats like Ashe, McEnroe, Sampras, Agassi, and Roddick. a win in this final SAP Open would certainly put Milos at par with this very select group of players.

Milos likes the conditions in San Jose, and has played some of his best tennis on this center court over the past couple of years.  His serve has been off the charts, both in terms of pace and placement, and his ground game has been damaging off both his forehand and backhand wings. There isn’t much that’s likely to stop his march to the semifinals; not even a potential quarterfinal rematch against his 2012 finalist, Denis Istomin.

The second quarter features Davis Cup hero, Sam Querrey.  It would be easy to peg Querrey as the favorite to make his way through to the semifinals, but he will have his hands full with his most likely second-round challenger, former champion Lleyton Hewitt.  While Hewitt has a first-round encounter with Blaz Kavcic to help him settle into the tournament and get used to the conditions, Sam has a first-round bye.

Most players will tell you that there’s nothing trickier than playing an opponent who’s “into” the tournament when you’re still trying to get used to the conditions. And even if they haven’t played since 2009, Hewitt’s 2-0 head-to-head over Querrey doesn’t help matters much either.  But if Sam settles into the match quickly, he should be okay for the win. On the other hand, Hewitt’s success at this year’s Kooyong exhibition showed that he’s a legitimate contender in best two out of three matches with significant wins over Raonic, Tomas Berdych, and Juan Martin Del Potro.

After Hewitt, seventh seed Marinko Matosevic of AUS will likely be Querrey’s last hurdle for a spot in the semifinals.

Speaking of best two out of three set matches, the combination of the format and the quicker indoor court gives the number four seed a decent shot at making the quarterfinals. Once he gets there, however, he’ll have a tough battle to get by Fernando Verdasco [5] for the third semifinal spot.

Tommy has a 2-1 head-to-head edge over Fernando on tour, but they haven’t played since 2009.  In many ways, it’s either player’s match to win or lose.  If Tommy’s body and game hold up, it could happen for him.  Fernando is no slouch, though.  He’s one of three former champions in the field (along with Raonic and Hewitt), and knows what it takes to win in San Jose.

Also, I’m sure Fernando would like a chance at redemption for the title he felt that he wrongly lost in the 2011 final after a fan’s yell on match point distracted him while returning Raonic’s serve.

In spite of recent knee issues that kept him from performing his best in Australia, Big John looks to be moving decently and serving at close to his best level.  He lost a five set heartbreaker to Thomaz Bellucci in Davis Cup, but should be okay in San Jose even though he hasn’t played there since 2009.

With a 2-2 head-to-head record, veteran player Xavier Malisse might cause Isner some issues in their probable quarterfinal match-up.  But I’d be hard-pressed to see him not make it through to Saturday’s semifinals.

Querrey might have the advantage in the head-to-head numbers, but Milos has owned this court for the past two years.  In a battle of evenly-matched big guys with big serves and big groundstrokes, I have to give the edge to the guy who has won back-to-back titles in the past two years.

Make that 4-1 after this semifinal battle.  Isner has way too much firepower for Haas.  He will make the big guy work for it with smart shot-making, but it won’t be enough to counter Isner’s untouchable serve unless Tommy has a great returning day.

They’ve played only once before on a Canadian hard court in last year’s Rogers Cup, with Isner winning a close 7-6(9), 6-4 match.  Serve dominated the stats, as one would expect.  But while Raonic served more aces than Isner, Isner won 91% of his first serves as compared to 78% for Raonic.  In a close match that can make all the difference.

I expect this match to go the distance, with the winner being determined by the same factors i.e. winning serve percentages.  If John keeps his percentages high, he’s got a good shot at thwarting the Raonic three-peat.  If not, Raonic has a “slightly” better ground game on which to fall back than Isner.

For all practical purposes, it’s anyone’s guess who will come out on top.  For history’s sake at this last SAP Open, I’ll go with Raonic for the three-peat.