You are here: Home / Contributors / Notes from the Front – SAP Open Day Two 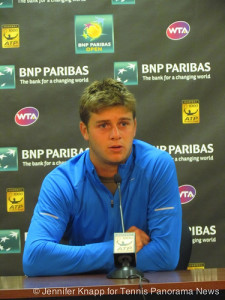 (February 12, 2013) SAN JOSE, California – One of the great things about watching live tennis in a tournament setting is that you get a better feel for the character of the match and the players.  Here are some courtside impressions from Day Two action at the SAP Open.