You are here: Home / Contributors / São Paulo: What To Do Other Than Watch Nadal 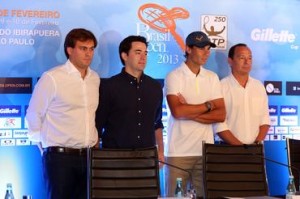 (February 13, 2013) São Paulo – If you’ve seen the video of Rafael Nadal’s entrance in São Paulo Tuesday night (posted on his Facebook), you probably got excited about the tournament. Very few ATP 250 events can proud themselves into bringing a 10,000 crowd for a doubles first round at 11pm. Sure the tournament is currently far from perfect – hot arena, court complaints – but the major city has much to offer.

On Sunday, the final (that could include the Argentine Juan Monaco,  the Spaniard Nicolas Almagro or even the local Thomaz Bellucci) will make the Ibirapuera arena boil. So why not relax first in the biggest park in São Paulo, that goes by the same name, right on the corner of the grounds? To find out what are the best things to do in the city, I had a chat with two press room neighbors: Sheila Vieira and Felipe Priante, from Tênis Brasil. They shared what are the must-do things in São Paulo.

Where Rio de Janeiro is famous for the cities, “paulistas” got to rely on their parks to enjoy the Brazilian Summer. On Sundays, the streets around and connecting the three biggest parks (Ibirapuera, Villa-Lobos and Parque do Povo) close, giving cyclists over 10km of free space. 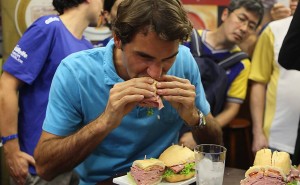 Opened in 1933, this is the place to find cheap things in São Paulo. Shopping is the city’s middle name and in the Municipal Market, you can buy fruits, vegetables, meats, spices and still eat the traditional “mortadela sandwich”. It is always absolutely packed but it was visited by Roger Federer last month, during his South American exhibition tour. If Federer can survive the masses, so you can you.

The São Paulo Modern Art Museum is not only a beautiful concrete and glass structure built in 1968, but it’s also located in the busiest street in the city, Avenida Paulista. Their collection includes a handful of Degas, Van Goghs, Cézannes and more. They also have a few exhibitions going on at a time, check out before you go

Brazil is the biggest home outside Japan for Japanese people and they’re mostly located in São Paulo. Bairro da Liberdade is the Japanese neighborhood in the city. Expect to find there the best sushi places, food fairs that sell gyoza in the streets, traditional clothes shops and other Asian hard-to-find products.

If you’re at the country of football, you might as well learn something about the most popular sport in the world. Located in the Pacaembú Stadium, home of Corinthians.

The neighborhood with the coolest bars. It has rich people and normal people, everyone having a drink. If you’re still hung up on the Football Museum, check out São Cristóvão – a bar football-themed where they sell vintage jerseys.

Even when Rafa isn’t playing, São Paulo is still full of sights and touristic attractions. If you’re looking for more things to do, the historic Casa das Rosas and the famous shopping streets, like Oscar Freire, are all good places to see before or after the tennis.