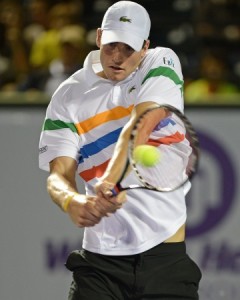 (February 14, 2013) SAN JOSE – Here are some more courtside impressions from an eventful Day Three at the SAP Open.  It was mixed bag of fun matches and dramatic wins.  But let’s start with the sad and unsettling loss by Donald Young.

The tournament action heats up on Day Four with a day session featuring young Americans Tim Smyczek and Steve Johnson battling for a spot in the quarterfinals, as well as the anticipated match between Sam Querrey and Lleyton Hewitt.  The night session features the return of the defending champion, Milos Raonic, as he takes on Michael Russell; plus more doubles action with the Bryans.  I will save my Raonic/Russell “tall and small” jokes for after the match…