You are here: Home / Contributors / Bellucci Loses to Volandri in São Paulo and Gets Booed Out 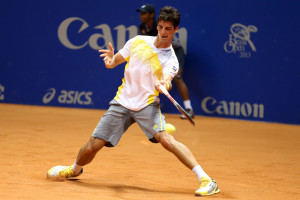 (February 14, 2013) São Paulo – Brazil’s biggest hope of a home winner ended today, after the country’s No. 1, Thomaz Bellucci, was upset by Filippo Volandri, in two sets. In a match full of errors, the fifth seed of the ATP 250 São Paulo fell in the second round to the Italian, 6-3, 6-2, and the crowd wasn’t happy. The 8,000 fans present booed their local man off of the court.

“It’s very sad getting booed in your country. This has never happened to me in my career before. It’s hard knowing people don’t appreciate our sport here”, said the 35th player in the rankings. “It’s never easy for me to play in Brazil. I’m always extra nervous here.”

“Here in Brazil, the mentality is different, people don’t appreciate athletes like they do in Europe or America,” complained Bellucci, that, in 2010, had a career high of 21. “It’s hard for the crowd to understand that I have bad days. People come here to watch good tennis and if I don’t play good tennis, they boo. ”

In his first round victory over countryman Guilherme Clézar, the fans present also cheered against Bellucci. After the win, he stated he understood the choice: “I am not the most charismatic player.”

Last year, Bellucci and Volandri met in the semifinals. The Italian also won, but in three sets. In the quarterfinals of São Paulo, Volandri, 88th, will play the lucky loser Martin Allund, from Argentina.