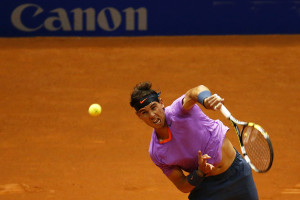 (February 14, 2013) São Paulo – During the week, players and coaches complained about the indoor clay courts in the  ATP World Tour 250 event in São Paulo, but Rafael Nadal doesn’t think they are in a bad state. The Spaniard, that got through the second round Thursday night, admitted the playing conditions are complicated, but believes the tennis balls are to blame.

“The balls are very fast and with very little hair, it’s hard to control. The problem isn’t the courts, it’s the ball”, said Nadal after beating Brazilian João Souza in two sets 6-4, 6-4. “It’s the ATP’s fault, not the tournament’s. The ATP doesn’t have the capacity and infrastructure to choose balls before the start of the tournament.”

Nadal’s quarterfinal match will be played Friday at 8pm local time. The world No. 5 faces Carlos Berlocq, from Argentina, the 78th ranked player.