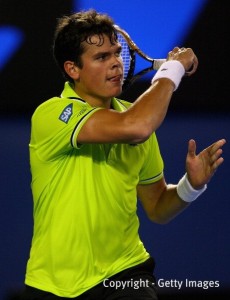 Xavier Malisse might be past his best days on tour, but the Belgian can still do damage given the right draw.  He could also make things easier for himself by not putting so much energy into griping during his matches.  Everything and anything from ball kids to the officials to his shots, you name it. It was a mutter-fest out there in his match against Matthew Ebden. He’ll need to be much more positive in his output if he plans on getting by John Isner in the quarters.

The battle of young Americans fizzled early as Tim Smyczek started strong but couldn’t stem the tide of unforced errors in going down to defeat against Steve Johnson. Johnson didn’t play particularly well either, but he played well enough to capitalize on Smyczek’s errors.  Smyczek is a small, wiry guy who “redlines” his game to produce the pace needed to compensate at this level.  Now he needs to figure out how to do that and find the court on a much more consistent basis. Johnson moves on to face Tommy Haas.

Sam Querrey got through a tough and very “losable” match to Lleyton Hewitt with the help of some last-minute errors by the Aussie in the final set tiebreak; notably a double fault on match point.  Querrey started strong, but then struggled mightily with shot consistency after an initial 5-2 lead in the first set. Hewitt battled hard to take the first set to a tiebreak, but was done in by a close call he couldn’t challenge because he used up his allotment.

The second set was a wash for Querrey with Hewitt raising his game to easily sweep and take the match to a third. The third set was by far the best in terms of quality.  Both men served well, defended admirably, and stood toe-to-toe in great rallies that tested each man’s resolve. To end such a great set on the aforementioned match point double fault was disappointing. A win is a win, though.  Querrey now faces a much easier opponent in Alejandro Falla for a spot in Saturday’s semifinals.

Michael Russell did well to make it to the second round by defeating Donald Young.  He didn’t play great tennis to beat Young, but then again he didn’t need to. Milos Raonic was a different story. Russell, like Olivier Rochus and a few others, is at a considerable disadvantage when playing larger and stronger guys like Raonic because he doesn’t have the weaponry to match up from the baseline. Russell scrambled well to get balls back but couldn’t do nearly enough in terms of moving the ball around to keep it out of the Raonic strike zone. With the win, Raonic moves on to face Denis Istomin in a quarterfinal rematch of last year’s final.

Every time I pass John Isner in the hallway, I’m astounded by his height.  Ivo Karlovic, Sam Querrey, and Milos Raonic are all tall players as well.  But none of them give me the same sense of height as John. It’s like I’m looking up a small tree. I wonder what the court looks like from up there?

The Hewitt kids are pretty gosh darn cute, and it’s a good thing too. After his disappointing loss to Sam Querrey, which ended with a double fault on match point, I tweeted, “Hopefully they’ll put a smile back on dad’s face tonight”. Sure enough, about 20 minutes after the match I passed Lleyton, his wife Bec Hewitt, and the kids as they were heading out to eat.  And yes, he was smiling.

Observation of the day? After watching Hewitt lose a match that was within his grasp because of an awful third-set tiebreaker, I had the sense that I’d seen something like this before.  I did: two weeks ago in the Super Bowl with Colin Kaepernick and the 49’ers last possession.

Odd sighting of the day?  Sportscaster Vern Glenn standing outside of the HP Pavilion trying to get his work laptop to connect online.

Quote of the day? Also from Vern Glenn but attributed to Ronnie Lott, and in reference to working in the sportscasting biz: “Always make sure they keep you on scholarship!”