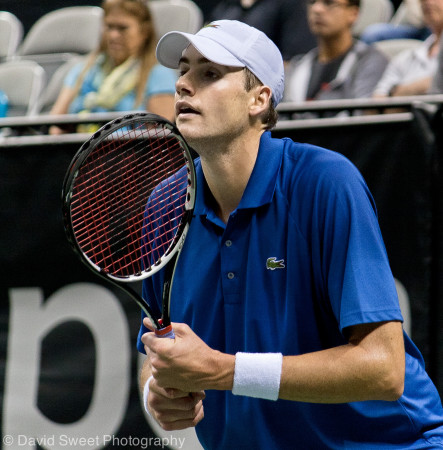 Steve Johnson bemoaned his lack of aggression in losing to Tommy Haas in the first quarterfinal of the day, feeling that he let Haas take control too often at key moments.  For his part, Haas is feeling good and grateful to be playing some of his best tennis towards the end of his career.  He’s especially happy to be able to do so in front of his 2 year-old who’s here in San Jose with dad.  “I know she probably won’t remember watching me play today, but maybe I can continue on playing and she’ll get to be around a couple of these tournaments and see me play competitively at a high level.”

John Isner didn’t play his best tennis in his quarterfinal match against Xavier Malisse, but he raised his level when needed to get by an opponent who was more than capable of a big upset. This was especially true in the first set tiebreaker after Isner dug a 0-3 hole with a mini-break on the first point.  The tide turned with a monstrous return on a Malisse serve to level at 5-all. He closed out the tiebreak with some mad scrambling on the baseline before flicking one final running forehand winner that was netted by the Belgian. First set to Isner.  Malisse’s level dropped off quickly in the second set.  Isner, with the first set in his back pocket, kept up the pressure on the slumping Malisse to close out an uneventful second set for the win.

The quarterfinal match between Milos Raonic and Denis Istomin turned out to be almost a carbon copy of their match in last year’s SAP Open final. Both men held serve easily and played to their strengths for most of the first set, with Istomin looking to be the stronger from the back court.  But once again, the tiebreaker was the deciding factor with Raonic sweeping all seven points for the first set.  After that, Istomin’s resolve slipped and Raonic’s confidence soared, and it was only a matter of time until Raonic closed it out.

Sam Querrey‘s win over Alejandro Falla was easily the best match of the day! It looked to be on track for a routine straight sets win by Querrey after a 6-3 first set.  No one told that to Falla, however, as the Colombian left scrambled with even more intensity in the second set.  In tennis, anything can happen when you make your opponent hit “one more shot”, and that was the case for Falla. Querrey’s level dropped, and a few key misses gave the set to Falla.  The tension was high for both guys in the third set, with neither giving an inch until the eighth game when Falla broke Querrey for 4-all, then held serve for a 5-4 lead.

A straight-sets victory was a distant memory with Querry playing loose shots on the deuce court to find himself at match point, 30-40. A crucial 133mph ace out wide to Falla’s backhand saved the point, and lit the fire under Sam that he needed to hold serve, break Falla for a 6-5 lead, then serve out the match.   That’s not to say that Falla didn’t have his chances, because he did.  Two netted shots for a game point at 5-all could easily have put the pressure back on Querrey’s serve to stay in the match. But it was not meant to be for Falla, and a chance for a huge upset.

Quick Keys to the match: Isner needs to start aggressive and keep Haas from feeling like he has a chance.  He must serve well to blunt Haas’ return opportunities, and keep the points short by coming forward as he’s done in other matches.  For Haas, if he can get a handle on the Isner serve and make this a running match, he will have the edge for Isner.

Pick: Sticking with Isner for the win.

Quick Keys to the match: Raonic is going to come out firing on all cylinders with high intensity.  Conversely, drops in his intensity level have been Querrey’s main issue in both of his previous matches. For Querrey to win this match against the two-time defending champion, there can be no drops.  He has to maintain focus, serve well, and stay strong on the baseline.  If Raonic can maintain focus and intensity from first point to last, something that Querrey typically can’t do, he’ll have the edge.

Pick: Sticking with Raonic for the win.

All photos by David Sweet