You are here: Home / Contributors / São Paulo Oversells Arena and Fans Watch Semis From the Stairs 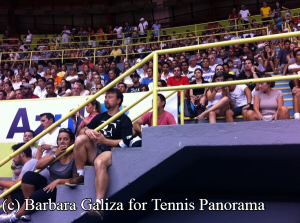 (February 16, 2013) São Paulo – The courts may have been the biggest aim of complains by the players, but now the ATP 250 São Paulo has got something new to worry about: the fans. In the semifinals, there were 9,300 available seats for spectators, but at least 300 had to resort to the stairs to rest, blocking the passage and emergency exits.

The tournament organizers couldn’t inform the exact number of tickets sold, that cost between US$51 and US$102. The Ibirapuera arena, where the competition is being held, has full capacity of 10,000 – but a part of those seats were reserved to press, TV equipment and guests. Eventually, the press area had to be shared with some of spectators.

Fans also had to endure severe heat in the complex. São Paulo’s temperature went as high as 91ºF (33ºc)  on Saturday and the multi-use arena isn’t equipped with air conditioning.