You are here: Home / Contributors / Nadal Says São Paulo Clay Courts are Much Faster Than U.S. Open and Australian Open 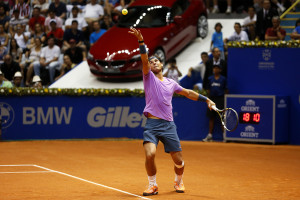 (February 16, 2013) São Paulo – Before this week, Martin Alund had never won an ATP-tour level match before, but today he managed to take a slow Rafael Nadal to a third set. The former number one took two hours to beat the Argentinean and advance to the São Paulo final. After his win, Nadal complained about the conditions, that are too fast for his taste.

“The conditions are not good for me and my game style. I don’t have the feeling of (ball) control or that I can attack. Today, my knee hurt more than it did in the other days”, said Nadal, who recently came back from a seven-month injury lay-off.

Since the beginning of the week, the Spaniard has been very critical of the balls used in the indoor clay tournament. After his win over Alund, Nadal said the conditions in São Paulo were too fast to be considered clay:

In the final, the world number five will play another Argentinean, David Nalbandian. The two had paired together this week to play the doubles draw, before Nadal pulled out citing “knee overuse”.

“I am physically prepared for the match tomorrow, I don’t know if my knee is,” said Nadal, who he will be trying to win his 51st title.