You are here: Home / Contributors / Nadal Wins His First Title Since Return From Injury 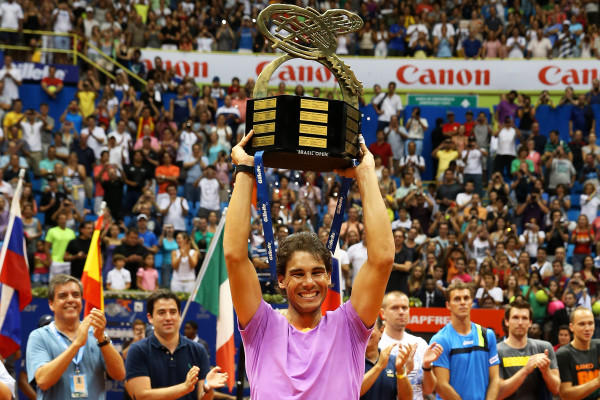 (February 17, 2013) São Paulo – Today marked an important day for Rafael Nadal. At São Paulo, the former number one took his first title since returning to the tour – after a seven-month injury-lay off. The Spaniard beat David Nalbandian in the final, 6-2, 6-3. This is the first trophy won by Nadal since Roland Garros, in June. Despite the win, Nadal, who looked rusty throughout the week, hasn’t yet decided whether he’ll play Indian Wells and Miami.

“My priority is celebrating today’s title, that was very important for me. I’ll think of Acapulco and nothing else”, said Nadal. The fifth player in the rankings returned to the court last week, at Viña Del Mar, and will play ATP 500 Acapulco next, starting on the 25th March.

“We are not in a position to think about the week ahead. We go day by day, week by week. We’ll see how the knee is responding in Acapulco and when we finish this clay season, we’ll see how things have passed in these three tournaments and decide if we’re prepared to face playing in Indian Wells.”

Since his return, Nadal hasn’t yet faced a player inside the top 30. However, the 11-time Slam champion assures he isn’t worried about possible rivals, but about his knee:

“It’s not a question about (stronger) rivals, it’s a question about the surface. It’s about the evolution of my knee. I have no problems to play better rivals, because I know I can lose and can win. To me, it’s not a problem to lose after not competing for so long.”

Barbara Galiza is a journalist from Rio de Janeiro and was the Brasil Open  as media in São Paulo for Tennis Panorama. She likes tennis and writing. Sometimes she blogs, most of the time she tweets. – @fiercetennis. Follow her São Paulo updates on @TennisNewsTPN.