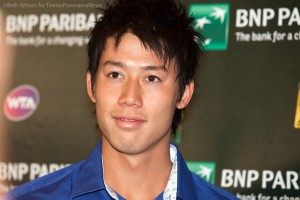 “I’m very happy with the way I played today,” said Nishikori. “To win this title is an amazing feeling. I tried to concentrate on all the important points. I served really well this week. I was practicing a lot and it’s getting better. Hopefully I can win a couple more titles. It’s been a good start to the year.”

“I didn’t play a bad match,” Lopez explained. “He was very aggressive from the beginning. I think he probably played his best. I have no regrets. I tried everything I could and he was just the better player today. I hope to keep playing like I did this week.”

Bob and Mike Bryan won their 85th team title and third this season with the victory in Memphis.

“We played great tennis all week and were even better in the final, which is nice,” Bob Bryan said. “We got out of a couple sticky moments early in the match and the momentum shifted our way. We haven’t put up scores like this in a while. It was nice to get it done and not sweat through a match tie-break. It was fun playing against two of our friends, too.”