You are here: Home / Features / Flipkens Talks About Relationship with Clijsters 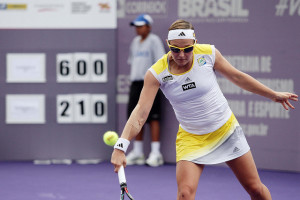 (February 26, 2013) Florianópolis – This week, at 27, Kirsten Flipkens reached the highest ranking of her career – 31st – and became Belgium’s No. 1 tennis player for the first time. Her happiness, however, was short-lived. Complaining of a right leg injury, Flipkens fell in three sets in WTA Florianópolis’ first round. After the loss, she talked about her relationship with countrywoman Kim Clijsters and her sudden rise in the WTA rankings.

“Last year I was ranked 262 and now I’m 31, it’s a great step. I don’t know what changed, I was just trying to focus on my game”, said Flipkens. “I’ve had lots of injuries in the past couple of years and now everything was falling into pieces. I quit with the (Belgian Tennis) Federation and I now have the right people around me. That made a difference.”

In Florianópolis, the Belgian lost to Olga Puchkova, from Russia, 2-6, 6-4, 6-4. Since her next tournament is Indian Wells, Flipkens stated her main concern was getting fit for the mandatory mixed event.

“In the second set, I slowly felt the power in my right leg going away and I didn’t know what was going on. Last week in Memphis and in Fed Cup, I had the same struggle. Because of my back’s rotation, I feel weakness on my leg”, Flipkens explained.

“It’s sad because I’m confident and I’m in my highest ranking ever this week. It was a shame”, she said. “Right now my focus is getting my body 200% fit for Indian Wells. Maybe I will have to take a scan of my lower back because I’ve had problems with it before. I want to know what’s going on because I can’t continue to play like this.”

Last year, Flipkens was briefly helped by former No. 1 and longtime friend Kim Clijsters. The Belgians, that have known each other since kids, paired up for doubles in the U.S. Open, before Clijsters retired from professional tennis.

“There are too many people thinking Kim is my coach. Right now I’m practicing in her academy, in Belgium, but she’s not coaching me”, said Flipkens. “It’s not like she’s giving me tactical advice, she’s just supporting me. I’ve known her since I was 12, she is a good friend of mine, like an older sister. Now, for example, she’s pregnant, so her family life is a priority. Maybe if it’s the right time and the right place, she’ll come (coach) with me, but her family is in the first place now and it’s logic.”