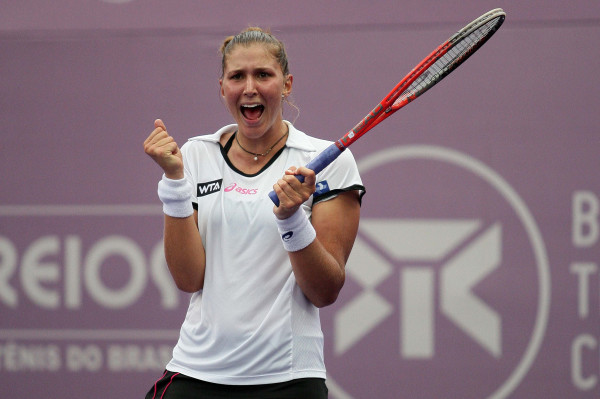 (February 28, 2013) FLORIANOPOLIS, Brazil – Big game and big personality. That’s how one could describe Beatriz Haddad Maia, the 16 year-old Brazilian wildcard. Bia, as she’s known, got to Florianópolis’ second round, until wasting three match points and falling to top 100 Melinda Czink. It was the first WTA tournament for the 6’1” girl, but with powerful groundstrokes and a great forehand, it likely won’t be her last.

In both of her matches, she was supported by Brazilian tennis’ elite: the three-time Grand Slam Champion Gustavo Kuerten and his former coach, Larri Passos. Maia, who trains at Passos’ academy, was mentored by him throughout the week and said their presence made her first WTA win even better.

“It must be one of the happiest days on a tennis court I’ve ever had”, said Bia after beating qualifier Chieh-Yu Hsu, 6-1, 6-2, in the first round. “Having Larri and Guga supporting me, even smiling, made it more special. I consider them both to be genius of the sport. Unfortunately, I haven’t seen Guga play that much, because when he was winning Roland Garros, I had just been born (laughter).”

The Florianópolis tournament was the first WTA event held in Brazil since 2002. For the young local players, this was an unique opportunity.

“You’ve got this great advantage playing at home that is being supported by the crowd. The feeling you get, when you hit a winner, and you hear people cheering, is great. That you’re not alone. I imagine what that sound must be like when you’re at a Grand Slam.”

In both matches, Maia displayed consistency and power from the baseline. Her lefty forehand made an impact on her opponents, as she was one point away from making the quarterfinals.

“I feel like I’ve worked a lot for this week and I’m starting to see the results. It brings me happiness to see I’m able to do what I’ve trained for”, she said. “I’ve got a lot to improve, you’re never perfect. I’ve been working a lot on my physical. Since I’m big and heavy, I still need to improve my agility. Larri and I believe that, in tennis nowadays, the player that defends well and has variety succeeds.”

Bia has a bubbly personality and even at an young age, she is comfortable with the Brazilian media. In her first Florianópolis news conference, she excitedly entered the press room wishing everyone a good night and asking: “Can I use the microphone? It’s looks fancy”.  She describes herself as a relaxed, normal 16 year-old.

“I’m not the type that goes out a lot, I prefer stay in with my father, mother and sister. Of course there are teenage fights with the family, like ‘oh, leave me alone’, but I’m alright.”

Her plan for 2013 is already settled. Bia will play the main junior events (Grand Slams, Banana Bowl, Gerdau Cup) and start transitioning to the pro tour, with Challenger and Future tournaments.