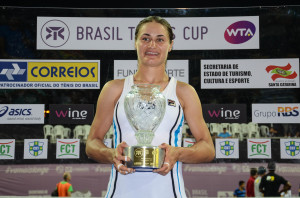 (March 2, 2013) FLORIANOPOLIS, Brazil – It wasn’t the final most fans in Florianópolis were expecting, but Olga Puchkova and Monica Niculescu made their ticket money worth it. The two battled for two hours until Niculescu came out victorious, 6-2, 4-6, 6-4, and snagged her first singles title ever.

“I feel so happy and so tired at the same time. At the end, I was cramping a little bit. I think I felt the matches before, when I was playing in the heat, today. I wasn’t 100% fit but I’m happy to finish, I don’t know how I managed to win”, said Niculescu. “I just want to sleep and think about (winning my first title) it tomorrow, when I’ll probably realize what I did. I’m so dead I can’t even smile (laughter).”

In the trophy ceremony, Puchkova shared a warm embrace with the Romanian and earnestly congratulated her. The two are good friends.

“She’s a nice girl, I was so happy to play with her in the final. We talk everyday. I was so happy. She was so nice at the end. After I won, she said ‘congratulations, I love your slice’, even though she hated in the match”, commented Niculescu on her infamous forehand slice.

The tournament, that marked the return of WTA to Brazil since 2002, was headlined by Venus Williams. The American, however, was upset in the semifinals to the eventual runner-up. Even without the former world No. 1 in the final, the tickets for the decisive match sold out.

“The public exceeded our expectations. We had nearly 20,000 fans throughout the week and the night matches were all practically full”, said the tournament director, Rafael Westrupp after the final. “Today, before Venus went to the airport, we already started to talk about her coming back in 2014. We want to work towards brings these players back and, hopefully, also a top ten.”

Barbara Galiza is a journalist from Rio de Janeiro and was covering the WTA tennis tournament in  Florianópolis, Brazil as media in  for Tennis Panorama. She likes tennis and writing. Sometimes she blogs, most of the time she tweets. – @fiercetennis.