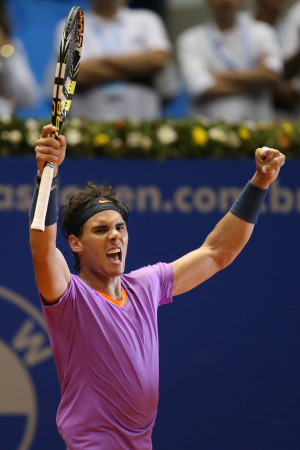 (March 2, 2013) Rafael Nadal is now 12-1 since returning to the tennis tour  last month after being sidelined since Wimbledon with a knee injury. Nadal captured his 52nd career title by crushing friend, fellow Spaniard and three-time defending champion David Ferrer 6-0, 6-2 in 65 minutes to win the Mexican Open title in Acapulco.

His title on the red clay courts of the South American “Golden Swing,” saw him win two tournaments (Acapulco, Sao Paulo) and a finalist in another (Vina Del Mar). Nadal  also won Acapulco back in 2005.

Ferrer went into the final on a 19-match win streak in Acapulco. Ferrer’s record against Nadal falls to 4-17.

Nadal opened the match by winning the first 8 games to lead 6-0, 2-0 and never looked back.
“This was a great week for me and today I played exceptionally well, I dominated the game against the world No. 4 and couldn’t be happier, especially when I think where I am coming from,” Nadal said. Perhaps the conditions were in my favor but I feel it was maybe one of the best matches of my career.”

“I wish I could have played a better match but I never found my rhythm,” Ferrer lamented. You have good days and bad days. Rafa played really well and I couldn’t do much, and never had any chance. I leave with a positive feeling.”

“My heart tells me I should continue competing, that I need to move on to the next tournament,” Nadal said in confirming that he’ll play the BNP Paribas Open in Indian Wells next week.

“In the first set the ball was much more live and the points were going much quicker, and I just played an incredible set. Even in the second set until 2-0 for me, 15-40 on her serve, I was in control, playing very aggressively. But the ball started getting heavier and the rallies were getting much tougher, and also she started to play much better. It got very difficult at the end.

“I’m so happy I closed it out,” Errani said. “Carla was playing really well. I’m even happier because it’s my first time defending a WTA title. I love this tournament – it’s a really special tournament for me.”

For Errani it’s her first title of the year and her seventh career tournament win.