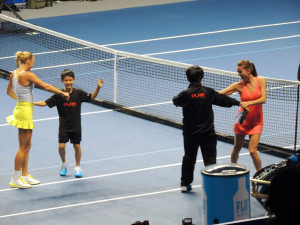 (March 4, 2013) HONG KONG – The BNP Paribas Showdown exhibition matches held at Madison Square Garden has a new sister event this year, held 13 time zones away in Hong Kong. While Hong Kong has the same amount of sky scrapers to match the Big Apple, Hong Kong’s tennis development is a long way behind, especially after losing the city’s men’s tour event some years ago. It is therefore to local tennis lovers’ great delight that a star-studded lineup had been confirmed to play the BNP Paribas Showdown Hong Kong that is part of a marathon of tennis events held across the world today to celebrate World Tennis Day.

World Tennis Day is an ambitious ITF grassroots campaign aimed at popularizing tennis. The main event here in Hong Kong was the exhibition between John McEnroe and Ivan Lendl, followed by Agniezka Radwanska taking on Caroline Wozniacki. Still sidelined Li Na was originally slated to play, but World No. 4  Radwanska is an equaly matched replacement in rankings. The two close friends Waozniacki and Radwanska said in the pre-match news conference that they hadn’t had a chance to see the city. Shame that the media couldn’t get in their favorite shopping question!

As for the matches, they were fun, lighthearted, and an opportunity for the players to try some flashy shot making.  Old rivals Ivan Lendl and John McEnroe met on court again after 17 years, with Lendl leading their head-t0-head record 21-15. This time it was McEnroe who won the pro set match 8-5. As usual he’s good money for any exhibitions, throwing his famous tantrums, questioning line calls, complaining about bad ball bounces that got the crowd into the match. Lendl responded in kind and the two together showed off some volleys, passes, dropshots and huge forehands that earned oohs and ahhhs from the audience.

Radwanska versus Wozniacki had more intense rallies but the mood was equally flamboyant. The good friends were uninhibited when it came to trying out fancy shots. A long groundstrokes and volley exchange in practice mode drew huge applause, and the ladies offered great entertainment with their exchange, dancing and inviting an former Hong Kong  player to play. In the final game Wozniacki requested coaching from her dad. It turned out to be futile as Radwanska closed it out 6-4, 6-4.

Again it was all smiles at the post-match news conference. McEnroe joked that this was the most memorable match in his rivalry with Lendl, who said he hoped his pupil  Andy Murray didn’t watch this match as it was 3:30am in California. The ladies were happy to be in Hong Kong despite their short stay. So that wrapped up the Hong Kong leg of World Tennis Day’s BNP Paribas Showdown, only to be continued immediately with the activities in New York City!

This is an exhibition but it’s still interesting to hear what the ladies had to say about playing friends on court as this pretty much happens week in, week out. To this Wozniacki said, “once you’re on court it’s a fight, and you fight for your life basically, and then when you’re off the court you’re friends agains and probably an hour or two after the match you just want to cool down, but then it’s a toss.”

Radwanska agreed, “We’re good friends because I think we can separate our private life and tennis and when we go on court, we both focus and we both want to win and then we shake hands and we’re friends again. We’ve been friends for 15 years!”

Naturally there were a lot of questions for Lendl about coaching strategies for Andy Murray. In typical Lendl manner he kept it tight-lipped. “My job is to coach Andy not to assess him in public. If I have something we need to work on, or I think Andy needs to work on, we do that. I never discuss it with anyone other than Andy.”

World Tennis Day is about helping tennis reach a bigger audience so as to ultimately benefit the sport. On trying to find the next big thing in America, McEnroe said, “Everyone in America, as well as many other countries, are looking for that next great player and the more that the game becomes accessible to youngsters and hopefully sexy in the way for kids to want to play in America. I can’t speak for every country, but it’s not that affordable.”