You are here: Home / Features / Anderson Tops No. 4 Ferrer 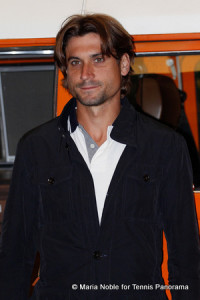 Ferrer who already has captured two ATP World this season was demolished in the final of the Mexican Open by compatriot Rafael Nadal.

Ferrer gave credit to his opponent. “He was better than me, “Ferrer said.  “He serve better.”

“Well, of course I am disappoint(ed), no, because I lost in first round,” he continued.

“But this is tennis, and it’s impossible to win always.  Kevin Anderson was better than me.  What can I do?”

“It was fantastic,” Anderson said of the win. “Obviously David is a great player, and especially in the last few years he’s really stepped it up.  Beating a top 5 in the world player is always ‑‑ it’s a great feeling, and especially somebody like David who doesn’t go away.

“I mean, he fights for everything; doesn’t give you everything.  I felt I earned the win today.”

The win is very significant for the South African who is coming off  right elbow surgery after losing at the Australian Open.

“Everything else is completely fine, ” said Anderson.  “Just that extension on the serve gives it a little bit of pain, and it fatigues quite quickly.

“So right now just really serving on match days.  Taking it quite easy on days off.  Hopefully, you know, just as time goes on, doing a lot of the treatment and rehab, I will be able to slowly start increasing that load.”