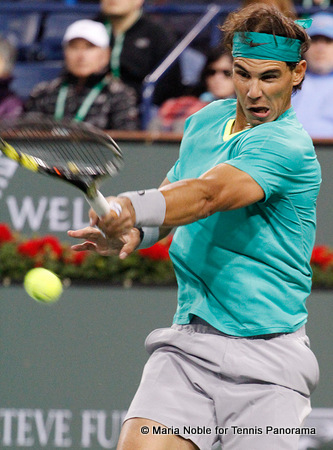 (March 9, 2013) No. 5 Rafael Nadal returned to the hardcourt for first time in almost a year by defeating American Ryan Harrison 7-6 (3), 6-2 in the  second round of the BNP Paribas Open in Indian Wells on Saturday.

The Spaniard had been off the tour with a left knee injury for seven months and last played on a hardcourt in Miami in late match 2012. He returned to the tennis tour last month on the clay court ”Golden Swing” in Latin America where he went 12-1 with two titles.

Nadal stormed off to a 4-1 lead against Harrison. The 20-year-old American came back to even the set, which Nadal took in a tiebreak.

After the match Nadal was happy with his play.

“My physical performance needs to improve,” Nadal added.  “My movements need to improve.  Matches like this help me, for sure, no?

“Today more than any result, any victory is important for me because that gives me the chance to play another day.  That’s what I need, play matches.  I need to compete.  I really, you know, want to compete, and I need.

Nadal was questioned about the new 25 rule which forces players to speed up their actions in-between points. Nadal is still not pleased with the new rule.

“I played much faster, no?, he said.  “And I am doing because somebody very smart puts a new rule that is a disaster, in my opinion.  Not in places like here that is dry, you know, not very humid place, but is completely disaster when we are playing in tournaments like Acapulco, Brazil, or Chile.”

“Sorry,” Nadal continued.  “I cannot support that, because for so many facts in my opinion the rule is wrong.  First thing, because the rules go against the great points of tennis.

“The best points of the season are long rallies and amazing points.  With this 25 seconds, you play a long rally and you think you can play another long rally next point?  No.  So go against the good tennis.

“So the guy who really accepted this rule was not very smart, in my opinion.  Even if you don’t have time for the TV to repeat a good point, and then the referee, I don’t know what he’s doing on his chair.  We can play without referee 100%.  The lines on every line, Hawk‑Eye, now 25 seconds.  He don’t have to analyze nothing.  He just have to put the clock and that’s it.  Then we can play.  Put the clock on court and play without umpire, because it’s not necessary anymore because the umpire is not enough good to analyze if the match is being hard, if somebody is losing time, penalize him with a warning.

“If both players are going the same way because you are playing a great point and you need to rest 40 seconds after the point, we don’t need anymore umpire.  That’s my feeling.  You know what I did?  Maybe somebody ‑‑ maybe nobody did at the ATP, but I went back to my matches, great matches, in Grand Slams, playing long rallies in big tournaments, and when you play like a 30 points, you know, 30‑shots rally, 40‑shots rally like final of Roland Garros, like final of Australia, like final of any good tournament, you know, how much time we rested?

“You have to see the third set of the US Open 2011 against Djokovic, and you tell me if the crowd was very happy about what happened in that set or not, and tell me if with this new rule that can happen again.  Please.”

Nadal will play Leonardo Mayer in the third round.