You are here: Home / Front Page News / Nadal, Federer, Hampton, Keys and Anderson on Notes and Quotes from the BNP Paribas Open 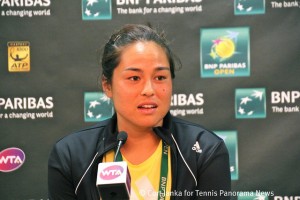 Q.  And you’re a little bit under the radar screen.  If someone came up to you and said, Hey, what’s the coolest thing about Jamie Hamilton, what would you say?

JAMIE HAMPTON:  I’m pretty boring, actually.  I wouldn’t consider myself cool at all.

JAMIE HAMPTON:  My life pretty much revolves around tennis.  I eat, sleep, and dink tennis.  There is not too much time for anything else for me.

I have to take care of my back and body.  That’s a full‑time job in itself.  To add tennis on top of that…

Q.  In the small sliver of time that you’re spending that you’re not playing tennis, what are you doing?

Q.  TV, sleeping?  Do you know who won the Oscar for best picture? 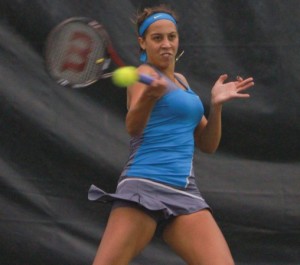 Madison Keys on baking and candy.

Q.  Outside of listening to every country music station that’s on the radio, what do you do on your off time when you’re not killing yourself on the court?

MADISON KEYS:  I love baking, which I have to get it out of my house as soon as I bake it or else I’m going to eat it all.  But I like baking.  I have little sisters, so I hang out with them all the time, so…

I feel like I don’t really have off time, though.  When I do have off time I’m usually having to do homework still, so…

Q.  Is that the one you put on your Facebook?

MADISON KEYS:  Those were just cupcakes.  The Oreo cheesecake cupcakes you put an Oreo on the bottom and fill the top with Oreo cheesecake.  They’re just in little muffin tins.  They’re delicious.

Q.  So when you break through and win a big, big tournament, will you promise to give us a round of cheesecake?

MADISON KEYS:  I was actually going to make them in Miami and bring them.  If I see you around, I will give you one.

Q.  Ever tried Sugarpova before?

MADISON KEYS:  I have, and it’s delicious.  Every time I see Max walking around with a bag of it, I’m like, Is there one for me?

Q.  Can you imagine getting a little of Maria’s candy into your baking?

MADISON KEYS:  That could be good.  Now I’m going to think about it.

KEVIN ANDERSON:  Well, we’ll be meeting next week in Miami, so we will be getting an update on that.

I think it’s a good rule.  I think it’s always tough because it’s not like ‑‑ I mean, you have to sometimes take into consideration, you know, extenuating circumstances.  If you play like an incredibly long point or the ball kids ‑‑ maybe the ball goes out or something.

Just from the standpoint I think it’s a good rule.  It makes it fair for everybody.  But I have heard ‑‑ as the year has gone on, some guys are saying it’s getting a bit more lax.  There aren’t as many time violations going on out there.  I just heard a couple guys saying with different matches some people are sticking to the rule and some people aren’t.

It’s a work in progress, so hopefully after Miami we will be able to sort of assess where it’s at and see what other people are feeling.  I mean, just have to go from there.

Asked about if he’s in favor of a shot clock

KEVIN ANDERSON:  Yeah, and when we implemented the rule at the US Open we chatted about that a bit, whether there is an affordability issue.

Also, I don’t think it’s ‑‑ it’s one of those things where there are sometimes circumstances that come up that you do need more than the 25 seconds that’s out of your control.

But if there is a shot clock there it might make things trickier.  I don’t think it’s like basketball where the time continues all the time.  You are waiting for other people.  That would be something we’d have to have a trial or something to see how that would work out. 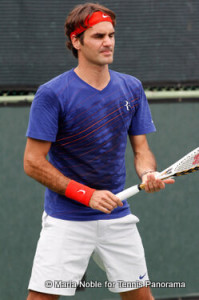 Q.  What will be a sign on a hard court that he’s (Nadal) playing well?  Anything in particular? 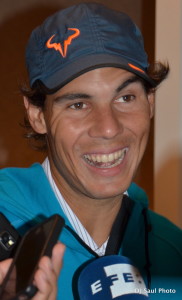 Nadal on hardcourts and Federer

RAFAEL NADAL:  I don’t want to say that, because anything that I will say not gonna affect in my career.  That’s not going to change during the years that I will be playing, no?

I think it’s more medical things than players think.  Hard courts are aggressive for the body.

If for the next generations wants to have longer careers and want to finish his careers with better conditions physically, that’s my humble opinion.  ATP have to find a solution and not continue playing more and more tournaments on this surface that is the harder one for the joints and for the knees, for the foot, for the ankles, for the back, for everything.

Q.  You’re the main one who talks about hard courts and wanting to have more tournaments not on hard courts.  Not as many as the other top players discuss that.  Do you think that a lot of players discuss your opinion, or do you think it’s more your personal experience, more you than other people?

RAFAEL NADAL:  Depends.  If you will ask a player who plays fantastic on this court is a thing that ‑‑ sorry.  At the end, we are here.  At the end, it’s an individual game.  At the end, everybody thinks for himself.

So they not gonna go against the hard court.  That’s why I say is not another players’ thing, it’s a medical thing.  Somebody have to think not for today.  I repeat:  I’m not talking about my career.  My career is done.

We gonna finish my career playing on the same or more tournaments on hard, because that’s the dynamic.

But, yes, no, my opinion is for the next generations that something have to change.

Q.  Is it kind of amazing how healthy Roger has stayed throughout his career, considering all the hard court tennis he’s played?

RAFAEL NADAL:  No.  It’s amazing?  I don’t think so.  I think, you know, he’s very good.  Don’t take my words because my English is not perfect, no?  But I think he’s very lucky to have this talent, no?  The talent of Roger is amazing, and the things that he’s able to do it, you know, the rest of the ‑‑ all the players, we are not able to play this way.

So, you know, that’s why he’s able to keep having big, you know, big career and very long.

That’s amazing thing that’s have a lot of value.  No, nothing to say about that.  He’s great, and for many reason he’s the best of the history, no?