You are here: Home / Features / Fish Returns to Singles Play for First Time Since US Open 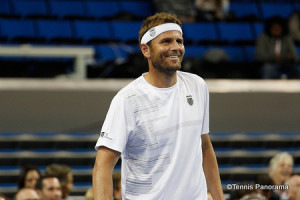 (March 10, 2013) American Mardy Fish who has been sidelined with a heart condition since the US Open, defeated countryman Bobby Reynolds 6-3, 3-6, 6-4 in the second round of the BNP Paribas Open at Indian Wells on Sunday.

“It’s been a tough few months, for sure,” said Fish.  “It’s nice to ‑‑ you know, you sort of feel like it was a win just to get back out there.  There is a lot of people that have sort of dealt with what I’ve dealt with and not come back.

“It’s nice to just play, first and foremost, and then you get out there and you want to win.  You want to stay within yourself a little bit and not get too fired up or too low or too high or anything like that.

“Then all of a sudden you find yourself in the third set, you know, deep in the third set losing.  You know, some of that sort of fight starts kicking in and you want to win.

“So, yeah, it was nice to ‑‑ I certainly didn’t expect to win, you know, so soon.  The tennis side of it hasn’t been an issue.  I have been playing for quite a while now as far as months is concerned, but just competitive matches, you know, you can’t duplicate those.”

“It’s great to see him back,” Reynolds said.  “He’s great for the game, and definitely for American tennis.  But, you know, knowing that when I was on the court, you know, that wasn’t really entering my mind.  Like, Hey, I’m going to let him win because he’s had a tough struggle.

“But, you know, I felt like I played okay and had chances.  Obviously right there at 4‑3.  But, you know, that’s what kind of separates us from where I’m at and what he’s done with his career.”

Fish the 32nd seed at Indian Wells overcame a break deficit in the final set winning the last four games to secure the victory. 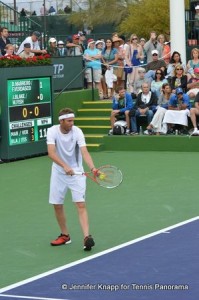 Fish made his first court appearance on Saturday, pairing with James Blake to win a doubles match over David Marrero and Fernando Verdasco 6-4, 6-4.

Fish will play the winner of Jo-Wilfred Tsonga versus James Blake match in the third round.