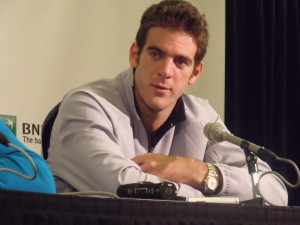 (March 10, 2013) INDIAN WELLS, California – Nikolay Davydenko can be a dangerous floater in any draw, but that worry never seemed to occur to a nonplussed Juan Martin Del Potro as the Argentine casually notched a 6-3, 6-4 win. Despite conceding a break at the beginning of both sets, Del Potro hardly appeared concerned as he gradually wore down the defenses of Davydenko.

Del Potro looked downright sluggish at the opening of the match and quickly found himself trailing 0-2. The crowd didn’t gasp at a booming Del Potro forehand until the seventh game, and that one was out.  Still, for the stretches of the match that Del Potro reined in his errors, he was able to force his opponent to start missing.

Looking ahead in the brackets, he will need to get in gear more quickly against the likes of Nicolas Almagro, should they meet in the quarterfinals.

Similarly, Marin Cilic looked unfazed by Albert Ramos in their earlier match. The opening set was tightly contested, but the second set quickly got away from Ramos as Cilic walked away with a 7-6(7), 6-2 win. Neither player faced a break point until the second set. Then Cilic earned two consecutive breaks to secure an insurmountable lead.

Throughout their match, Cilic played safe, but deep balls while it was Ramos going for the bigger shots, win or lose. In the end, Ramos was hitting more errors than winners. Cilic was content to punch his time card and advance to the next round where he will face a tougher opponent in Milos Raonic.