You are here: Home / Features / Stosur Building Confidence, Comes Back to Beat Peng 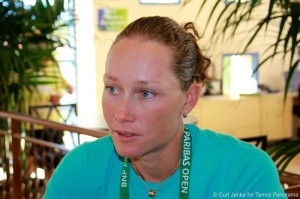 (March 11, 2013) INDIAN WELLS, California – Sam Stosur had to dig deep and come from behind in the third set to beat Shuai Peng 6-3, 3-6, 6-2. Peng may have been a familiar opponent, but the match was much more tightly contested than their lopsided head-to-head record would suggest. Stosur has now beaten Peng all 5 times they have met.

Asked if her previous record against Peng helped when the match was close, Stosur responded “Not necessarily, but I guess knowing that in the back of your head it does give you a little bit of comfort knowing that, ok, I’ve had success against her. There’s something about my game she doesn’t like and if I can get back to that then I’m in with a good shot.” However, she also added “You’ve got to stay focused on the match at hand. Having won those four doesn’t mean you’re going to win five.”

That was certainly true today when Peng upped her level of play in the second set, grabbing an early lead. Stosur fought her way close to breaking back, but couldn’t convert against her determined opponent.

Again in the third set, Stosur found herself down an early break. “When I lost serve early in that third, I knew that I really had to step it up,” she said. “I wasn’t playing bad, but I probably wasn’t doing enough. Then I played two really good games to get back on track, and then those last four, which I was really happy with.”

Stosur next faces the winner of a later match between Ana Ivanovic and Mona Barthel. Asked who she would prefer to play, Stosur said, “I’ve played Ana quite a few times—had some success, had some close matches—but I’ve never played Mona. I know Ana very well, I don’t know Mona so much, so I’ll take a little bit of a look at that one.”

Over Stosur’s career, her wins seem to come in patches when her confidence is elevated. This year got off to a rocky start, but it appears that she is starting to accrue confidence, reaching the quarterfinals in Doha and Dubai. The setting here in Indian Wells also seems to add to her comfort level.

“I do feel like I’m in a good spot at the moment. I feel like the conditions here suit my game. I’ve made it to the semis here one time. I do feel like I’ve played really good matches here and I’ve won the doubles as well. I think getting through a mach like today is really important for me.”

On the topic of doubles, Stosur was in that draw as well this year, playing with Lisa Raymond, until they ran into her countrywoman Casey Dellacqua. Asked what it was like losing to another Aussie, Stosur smiled wide and said, “I’m disappointed to lose not matter who I’m playing, but I guess if it’s Case, and she can go through, hopefully they can do very well.”

Stosur didn’t have a steady doubles partner lined up at the beginning of the year, but  she said, “Lisa’s partner that she was signed up with pulled out after Australia, so I said that I would play the Middle East, here and Miami. Now actually we’re going to go through and play the Slams together and a few other events. We’ll play a little bit more and hopefully we can do well.”

More wins in doubles could only add to her growing confidence in singles and bodes well for the rest of the season.

While it was a little cooler here earlier in the week, today was hot and sunny, which seems to be Stosur’s preference. Since spring is almost underway here and summer is just ending back in her Australian home, does she ever get to experience the winter season?

“I don’t typically like the cold too much,” Stosur laughed. “Tennis players follow the summer around the world. This is a really nice part of the year at home in Australia that I’m never home to experience, but this isn’t too bad either.”