You are here: Home / Features / Djokovic Win Streak up to 20: Faces Last Man to Beat Him – Querrey Next 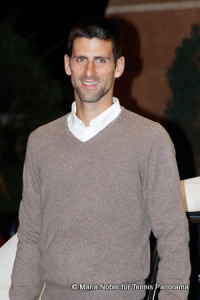 The World No. 1 was forced to come back from a 2-5 deficit in the first set when Dimitrov’s serve began to fail. The Bulgarian hit 6 double faults including 4 in one game.

“It’s been a long time, Djokovic said. “It’s been a few months and I played a few tournaments since then.  So, you know, I don’t think it’s going to affect me negatively in a psychological way.

“I won four, five times against him.  Yes, he has won the last encounter indoors.  Different circumstances and conditions.  So we’ll see, you know.

“I mean, we’ll play in front of his crowd and he has a big serve and big game and he can come up with the goods when needed.  He loves to play also on a big stage.  We’ll see, you know.

“I don’t know if we’re going to play day or night match, and that’s going to also make a little difference.

“During the night it’s a bit slower, so we’ll see how that goes.  I will need to definitely start better than I have done today, and try to step into the court a little bit more.”

“It was tough,” Querrey said of the match versus Matosevic.  “Last couple of weeks those are the matches that I lost.  It feels great to get through it.

“You know, there was four breaks to start the third set there, and, you know, I was glad I just battled through it.  I didn’t feel I played unbelievable, but I just stuck around, stuck around, got a break at 5‑All, and then closed it out with some good serves.

“So I was really happy, and I feel like I can only play better than that in my next round.”

Querrey spoke about playing Djokovic next; “I’m just going to hopefully play well, hopefully be aggressive, hopefully on those break points, deuce points, you know, have some balls go my way.

“I’m going to try and just enjoy it out there.”

“He does everything really well:  Unbelievable forehand; unbelievable backhand; moves around the court great; returns great.  It’s tough to pick on something.

“I might have to go outside of my comfort zone a little bit and do things I don’t like to do, and hopefully it will pay off for me.

With John Isner’s early loss, Querrey will become the top-ranked American man when the next rankings come out.

“It means a lot,” Querrey said.  It’s a great feeling.  I feel like I have worked hard to earn it.  Everyone seems like they’ve got their shot with Andy and Mardy and James and John, and so I feel like it’s my turn now.

Djokovic has a 4-1 record against Querrey.